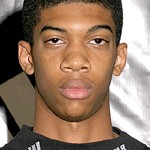 Does anyone around here remember Kraidon Woods? The Pennsylvania native and Hill School graduate had initially committed to play his college basketball for Jay Wright at Villanova, before being lured away by Arizona State.

The 6'8" forward never really caught on in the desert though, and after two seasons and 21 games, Woods transferred. He ended up at Binghamton, a program in so much distress that it might not even have a team anymore.

He was offered a spot to finish college at Drake University. Will he have to sit out another year though?

According to Rob Dauster, the NCAA granted him a hardship waiver. He'll get play his final two years of eligibility without a wait.

Would things have been different for Woods if he had gone through with his commitment to Villanova as he initially had intended?