Share All sharing options for: Matt Szczur Drafted by Cubs 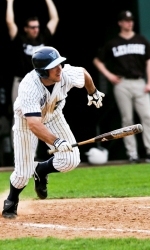 (Updated 6/9) Villanova multi-sport überstar Matt Szczur was drafted today by the Chicago Cubs in the 5th round of the Major League Baseball draft. He was the 160th overall pick in the draft. He was drafted previously as a high school player in the 38th round by the Dodgers. This was the highest a Villanovan has been picked since Kevin Mulvey was picked 63rd overall in 2006.

This pick has implications beyond baseball, however, as signing with the Cubs would effectively end Szczur's football career. While there is a longshot chance that the Cubs would allow him to return to school in the fall to finish his football eligibility as they did with Jeff Samardzija, a fifth round pick would have less leverage to negotiate such an arrangement.

Recently, when discussing the issue, Szczur had indicated that his future may be in baseball, even though he loved football. In baseball he would likely have a longer career, since football makes it difficult to stay healthy. Meanwhile, by concentrating fully on baseball, he would likely improve upon his already stellar abilities on the diamond -- he lead the Wildcats in eight offensive categories this season, including batting average, where he hit .443 (the fourth-highest single-season average in school history and the 6th best in college this year).

The recommended slot bonus for the 172nd pick in the draft last year was around $155,000. Many teams will pay a bonus above-slot, however, especially when a player has the option to return to college if they are not sufficiently wooed by a contract offer. So, while the suggested contract amount might not be large enough to entice Szczur to forgo the rest of his college education (and give up a chance to win another football title), if the Cubs are motivated to sign their fifth pick they will surely make an offer he cannot refuse.

Update: Another Villanovan, outfielder Justin Bencsko, was also selected in the MLB draft by the Pirates in the 20th round. Bencsko was a four-year player at Villanova and was the second-leading hitter for the Wildcats this year, he also lead the team in runs scored and stolen bases.