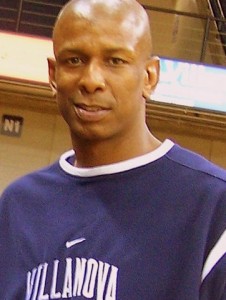 West is leaving to pursue a business opportunity

Word came out this morning of some changes on Jay Wright's Coaching Staff for the upcoming 2010-11 season. If you follow the comments on the site, you will know this is not coming out of the blue.

Assistant Coach Doug West will be leaving the staff to "pursue a business opportunity". West will be replaced by Keith Urgo who was holding the Director of Basketball Operations position.

Urgo's former position will be taken over by former Villanova player, Baker Dunleavy, who will by the DBO.

Doug West, who served the past three seasons as an assistant coach, has left the staff to pursue a business opportunity. To replace West, Keith Urgo, who spent the past two years as the Wildcats’ manager of basketball operations, has been promoted to an assistant coaching position. Joining the staff as the new director of basketball operations is Baker Dunleavy, who played four seasons for the Wildcats from 2002-06.

“Doug has done an outstanding job for us these past three seasons,” stated Wright of West, a Wildcat great from 1985-89 who scored 2,037 points at VU before embarking upon a 12-year career in the National Basketball Association. “His loyalty to this program and ability to mentor young men was an important component in our success during his time on the staff. Doug has always been a great representative of Villanova and will continue to be a part of the family even as he pursues this exciting new opportunity.”

Urgo came to Villanova in 2007 as the video coordinator from the coaching staff at Gonzaga High School in Washington, D.C. After one season in that capacity, he was elevated to the position of manager of basketball operations, where he worked tirelessly in the oversight of much of the Wildcats’ off-court activities, including academics and team travel. In his new role, he will assist with recruiting and on-court player development.

“Keith is a passionate and dedicated young coach who earned this opportunity,” stated Wright. “In the operations role he had the chance to learn every facet of our program and is very prepared to take this step. He has a bright coaching future ahead of him.”

Dunleavy played in 28 games over four seasons for the Wildcats, including the 2005-06 campaign that vaulted Villanova back into the national top 10 and brought the school its first NCAA Elite Eight appearance since 1988. Following graduation, Dunleavy worked in the financial sector on Wall Street where he was employed by Merrill Lynch until accepting his new position. His father, Mike Dunleavy Sr., is a former NBA player who has served as the head coach of four franchises.

“As a player, Baker had a terrific sense for the game and was a very underrated part of our success in 2006,” states Wright. “Baker is an extremely intelligent young man who has all the tools to be an outstanding coach. We’re thrilled to welcome him back.”