Share All sharing options for: The Week In Review (Week of June 13) 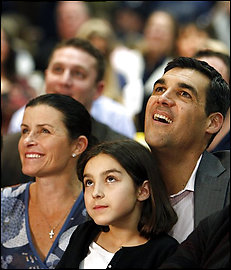 Happy Father's Day to all you Nova Dads out there! Philly.com wrote a Father’s Day feature on Villanova’s Jay Wright. Of Jay, they say, "when it comes to highs, nothing really compares to being an assistant coach for one of his three children's teams. "I love it," he said. "As long as I'm not the person in charge." Whether that means helping his father coach sons Taylor and Colin to a Little League title 5 years ago, or now getting fields ready for his 11-year-old daughter Reilly's softball games. The person in charge of that is his wife Patty." Here, he can just be a proud dad. Even if it means finding a seat down the left field line or in a corner of the stands to watch his sons do their three-sport thing at Episcopal Academy. As a family, they try their best to maintain a normal existence. He credits Patty, who he says is very protective. I want to be there for them, but I want to keep it low-key," Jay said. I'm just another father."

Fanhouse reports that many coaches want to see changes in the NBA’s One-And-Done rule.  Jay Wright was quoted, saying “ players should have the opportunity to go to the NBA out of high school. But if they come to college, they should remain for three years. There's two parts of that -- if they're good enough to be a pro out of high school, they should go. It gives that option. If you go to college, it's a commitment. The university is making a commitment to you to get an education, but you ought to give a commitment to the university of three years. Even if you leave after three years, it's much easier to come back and finish college and get a degree.  Most guys would do it eventually. When you leave after one year, it's really difficult to return for your degree."

Don’t forget to vote in Mike’s poll, which asks “Should the "one-and-done" rule be abolished, allowing elite players to jump directly to the NBA out of high school?”

Zagsblog reports that Big East officials are denying an Orlando TV report claiming that the conference will invite Central Florida and Memphis to join the league “as soon as next week.” 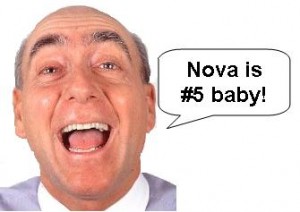 Dick Vitali posted his 2010 Preseason Top 40.  Is should come as no surprise that he likes “Coach K and the Dukies to go back-to-back, à la 1991 and 1992, baby!”  But he also likes Villanova, picking them #5 behind Duke, Michigan State, Purdue and Ohio State and one slot ahead of the home of the “one & done,” Kentucky.  Of Villanova, he writes, “Jay Wright doesn't have Scottie Reynolds returning, but he still has lots of talent at his disposal. Corey Fisher and Corey Stokes provide veteran leadership.”

Philly.com reports that Reggie Redding worked out with the Sixers and is mulling an offer from a team in Cyprus."I told him I'd visit him if he played there," Jay Wright said, laughing. "There are some other spots that aren't as nice, and I'm not sure I'd go."  "I hear every other day from my agent [Justin Haynes]," Redding said. "He lets me know about other teams that are interested.  In a couple of weeks, if that's what I have, I'll look into it."

Truth About It  reports that Scottie Reynolds had a good workout with the Washington Wizards.  They write, "as a combo guard, Reynolds doesn’t have the highest prospects for the NBA Draft. ESPN projects him as someone who could go in the second round or undrafted, and both DraftExpress and NBADraft.net do not list him in their respective second-round mock drafts.  Reynolds gave a seven-minute video interview afterwards, where he talks about the draft, his fantacy of playing for his hometown Wizards, and his "big brother," Randy Foye.