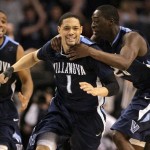 Ryan Feldman of The Hoops Report blog has been talking about Thursday's NBA draft recently. He has appeared on WIP 610 in Philadelphia and has been taking questions about it on Twitter. According to Feldman, things aren't looking good for Scottie Reynolds.

In the late second round, of course, anything can happen. Reynolds may be picked up by a team in that spot with an excess of picks and a dearth of guards. If Scottie is drafted, it will likely be by one of the teams that he worked out for, and that was by-no-means a short list; just last week he attended workouts in New York, D.C., Portland, and San Antonio.

All of those workouts reportedly went well. That is what should give Reynolds (and Nova Nation) some confidence that the NBA is in his future. As a first-team All-American and 2,222 point scorer, it would seem strange that an NBA franchise wouldn't want to secure his services. Even if undrafted, therefore, Scottie would likely be one of the first few guys scooped up in the rookie free agent market.

If Scottie is drafted tomorrow, he won't find out about it in person (he wasn't invited) and he won't see it on television: he is planing to spend the night playing basketball at his old high school gym.

Don't forget to read my post about Scottie's Draft Prospects at BIAH.