Share All sharing options for: The Week In Review (Week of June 20)

Brian broke the story on Scottie and the Suns yesterday. DigitalSportsDaily.com fills in a few of the details. They report, "Scottie Reynolds is expected to join the Phoenix Suns summer league roster. "It's fantastic," said Suns Director of Player Personnel Todd Quinter. "He had a great chance of going in the draft. We were really fortunate he wanted to play for our summer team." He plays with a lot of heart. He might not be a traditional point guard but he's a scorer and can distribute. He can be really good at our pace. He wants to be in the NBA badly."

"If Phoenix even has a spot on their roster for Reynolds is yet to be determined. Reynolds became the first Associated Press first-team All-America selection to go undrafted into the NBA since 1976. I think (Reynolds) looked at it and said that's what the NBA is. It's size, it's speed, it's length," Wright told the Associated Press. "He was the underdog coming out of high school and now he's going to be an underdog making the NBA and he's taking on that challenge. I don't think he's disappointed about it anymore." 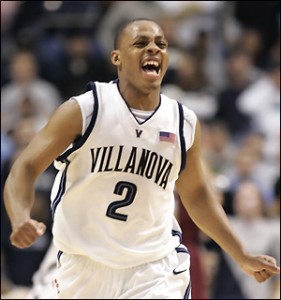 ESPN's Dana O’Neill wrote an article about college players who declare for the NBA draft before graduating, only to find themselves on the outside looking in.  She reports that "Villanova’s Randy Foye thought about leaving after his junior season but in the end, elected to remain in college. “He told me he wanted to get better and stronger and didn’t think he was ready for the NBA. When I asked him about walking away from all that money, Foye -- whose father died when he was two, whose mother abandoned him when he was in kindergarten, had been raised by a grandmother in the toughest part of Newark and arrived at Villanova with little more than a duffel bag filled with his belongings -- just looked at me.  “I’ve been poor all my life,’’ he said simply. “What’s one more year?’’

ESPN’s Andy Katz  looks ahead to the 2011 draft, the players generating the most buzz in scouting circles and what they must do to be a real factor at next year's draft.  Two Nova players made his list – Corey Fisher and Maalik Wayns.  About Corey Fisher, he writes, “Fisher will take over the lead-guard role from Scottie Reynolds.  Before he's ready to leap to the NBA, he first has to prove he can take over Nova.”  About Maalik Wayns, he writes, “expect Wayns to be Nova's next star. If he becomes an all-Big East talent, as expected, it will be hard to keep him off the draft boards.”

Philly.com reports that “Ben Ijalana, a senior offensive tackle at Villanova, is the only Football Championship Subdivision player named to the 2010 Outland Trophy Watch list.  The trophy is given annually to the nation's top interior lineman.  The 6-foot-4, 320-pound Ijalana earned spots on both the Sports Network and Walter Camp all-American teams last season. The Rancocas Valley High School product is also a two-time first-team all-Colonial Athletic Association selection.”

ESPN.com reports that “prep players may have to wait a little longer to start accepting scholarship offers. An NCAA committee announced Thursday that it will back a proposal to prohibit making scholarships offers to recruits before July 1 in the summer between their junior and senior years in high school. If passed, it would apply to all sports.  Coaches also would have to receive high school transcripts documenting at least five semesters or seven quarters worth of academic work for a young recruit before they can offer a scholarship.”