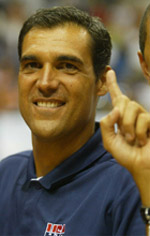 Villanova head basketball coach Jay Wright will serve as co-coach of the USA Basketball Select Team, which is a group of 20 current college players that will help train the USA National Team. Coach Wright will share coaching duties with Washington's Lorenzo Romar during the training sessions to be held in Las Vegas from July 19-23.

Wright has coached for USBasketball on three previous occasions; in 2000 he was an assistant coach for the World Championship for Young Men Qualifier, in 2005 he was the Head Coach for the World University Games, and in 2007 he coached the Pan Am games.

Members of the USA Select Team will converge on Las Vegas and conduct a private training session July 19, then train with the USA National Team July 20-23.