The Week In Review (Week of July 4)

Share All sharing options for: The Week In Review (Week of July 4) 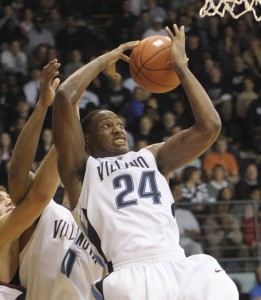 In a week when Brian and Mike battled it out to earn the distinction of most prolific Nova blogger in the universe, you might wonder what's left to cover in my post this week. Well, to paraphrase Gilda Radner's SNL character, Roseanne Roseannadanna, "there's always something."

Nova Notebook featured Corey Stokes this week. They write, "[i]n three seasons, he has evolved from a stand-still jump shooter to a more well-rounded player. There were numerous occasions in 2009-10 that Villanova head coach Jay Wright and his staff leaned on Stokes to slow or stifle an explosive scorer on the opposition. "When I first came in I was just shooting jump shots," Stokes states. "Now I think my game has expanded. I can drive to the basket. My ball-handling has gotten a lot better. I am working on becoming a great defender "As a staff, we really thought Stokes had his best year (in 2009-10)," stated Wright. "He made plays, got big rebounds and defended well. We think he has completed himself as a player and is much more than just a great shooter." "I think since this last season ended we all feel like we have a chip on our shoulder and have something to prove to people," he states. Stokes likes what he sees in sessions of open gym in the months since 2009-10 closed."

Several years ago, a basketball journalist wrote one hot July day, “when there is nothing to write about, publish a top 20 list.”  We saw a few of those this week.   BleacherReport posted a list of the best college basketball programs of all-time. The factors considered in their ranking were national championships, total wins, NCAA Tournament wins, Final Fours, and conference championships.  Villanova ranked #16, with one NCAA Championship, 1,530 all-time wins, four Final Fours, and 49 NCAA Tournament wins on their resume.  Rollie  Massimino is considered Villanova’s “best known figure,” while Paul Arizin was picked as Nova’s best all-time player. Other notables on their all-time best teams list are:  #20 Temple, #19 Marquette, #14 Georgetown, #9 Syracuse, #7 Louisville, #5 Kansas, #4 Duke, #3 North Carolina, #2 UCLA, and #1 Kentucky. 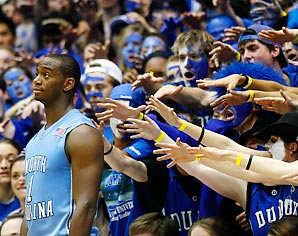 BleacherReport also published its list of the 10 Toughest Places To Play In College Hoops, nerve-racking venues known for raucous crowds and unbearable taunts.  Villanova’s Pavilion, with its somewhat dignified fans, did not make the list (undoubtedly Father Donohue is smiling), but several arenas well-known to Nova fans did, including Pitt’s Peterson Events Center (#7), Syracuse’s  Carrier Dome (#5), Kentucky’s Rupp Arena (#3), Kansas’ Allen Fieldhouse (#2) and Duke’s Cameron Indoor Stadium (#1).  [Editor’s Note:  how did the WVU Coliseum, where opposing teams play with one eye on the crowd at all times, miss the cut?]

West Virginia Gazzette reports that the Big East, at least in a subtle way, is trying to entice Villanova to upgrade its football program the way Connecticut did.  "There's a push on, yes,'' said one source. "It's not a hard push and we don't want to make it that way because we don't want to force [Villanova] to do something they don't want to do or scare them off.  But that would certainly solve some problems.''  There are issues, of course. Villanova loses millions on its football program each year, despite its success. It plays in an 8,000-seat, [Editor's Note:  they are only off by 4,000 or so] on-campus stadium and didn't even sell it out for a national semifinal game last year. And as Temple can attest, Philadelphians aren't exactly clamoring to watch college football." 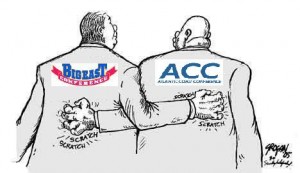 The New Jersey Star-Ledger envisions a conference realignment that would merge the Big East and Atlantic Coast conferences into “The Big Atlantic Conference, which likely would be the best basketball conference in the nation while also being a respectable football league.  The Conference would have North and South divisions.  The North would be comprised of Boston College, UConn, Cincinnati, West Virginia, Temple, Villanova, Notre Dame, Georgetown, St. John’s and Maryland.   The South would comprise Wake Forest, North Carolina, North Carolina State, Duke, Louisville, Central Florida, South Florida, Virginia, Virginia Tech, and Memphis.  This scenario has Villanova, Notre Dame, Georgetown and St. John’s as basketball-only schools. Miami, Clemson, Florida State and Georgia Tech are assumed to join the SEC, and Syracuse, Rutgers and Pittsburgh are further assumed to join the Big Ten." [Editor's Note:  A very intriguing idea!]

MercuryNews.com reports that troubled former Seton Hall coach, Bobby Gonzalez, who was “fired in March for his antics on and off the court, has been arrested on charges of shoplifting from a New Jersey mall. He is accused of taking a satchel worth roughly $1,400 from the Polo Ralph Lauren store in the Short Hills Mall. The shoplifting charge is a third-degree offense punishable by up to five years in jail." 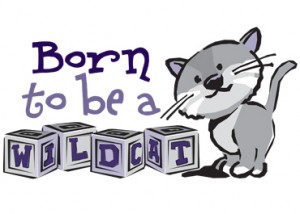 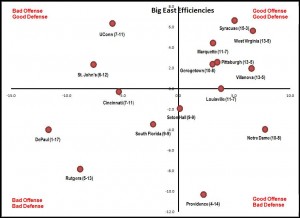 About Villanova, GreyCat writes, “Villanova has matched Connecticut's three season "drift", but in the opposite direction. The Wildcats have seen their offensive efficiency improve in each of the last three seasons, even as their defensive efficiency has settled closer to the conference average.”