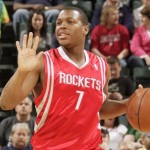 (UPDATED 6:06pm) In a post-LeBron world, the Cleveland Cavaliers have decided to move on to plan B: Signing another Philadelphia guard for their backcourt. The Associated Press is reporting that Kyle Lowry has signed an offer sheet with the Cavaliers to join fellow Big 5 guard Delonte West in Cleveland.

The offer is a three year deal with a team option for a fourth year, worth around $24 million total. Since Lowry is a restricted free agent who was tendered by the Rockets, they will have seven days to match his offer sheet. If they do not match, Lowry will become a Cavalier.

He would be expected to back up Mo Williams at the point. In Houston he currently serves as a backup point guard to Aaron Brooks.

Update: The Houston Rockets announced this evening that they will match Cleveland's offer sheet and retain the services of Kyle Lowry.

Via twitter, Rockets GM Daryl Morey stated: "Congratulations to Kyle Lowry on signing his new deal. We plan to match the agreement and we are excited he will be returning to the Rockets." He went on to add, "Credit Mr. Alexander - bringing Kyle back took one quick phone call. I appreciate the unshakable faith he has in the plan we laid out in Feb."

It was apparently always in the Rockets' plans to match an offer and keep Kyle in Houston.

In other alumni news, Allan Ray recently signed with Italian Serie A club, Sutor Montegranaro. He is returning to the Italian league after spending the entire 2009-2010 season recovering from a knee injury.

Special thanks to readers RFS and Nick '09 for contributing to this post.