In Brian’s July 8th post, "My All-Time Villanova Team," many great points were made but nothing was really settled. With a hat-tip to Gunner for the idea, we decided to try a more rigorous approach to settling the debate over the all-time Villanova basketball team. We'll let the readers decide through a series of polls, covering each position, over the upcoming weeks.

First up is the coaches. Villanova has been blessed with great coaches over the past 74 years. The resume's of four of the best are provided below (information sourced from Wikipedia). Vote for the coach you believe is most deserving of the honor of being called "Villanova's greatest."

Al Severance (1936 – 1961) Severance compiled a 413–201 record (.673) over 25 seasons. In addition to coaching basketball, Severance was a professor of business law at Villanova. Under Severance, Villanova's basketball program rose to national prominence. His 1939 team won the first ever NCAA Tournament game, which put them in the first Final Four. Severance’s Wildcat teams reached the NCAA Tournament again in 1949, 1951, and 1955. Villanova earned NIT bids in 1959 and 1960.

Severance discovered arguably Villanova’s greatest player ever, Paul Arizin, playing a pick-up game as a Villanova student. Severance yielded the coaching reins to Jack Kraft in 1961 and died 24 years later on the morning of April 1, 1985, the day Villanova won its only NCAA basketball championship. He was inducted posthumously into the Big Five Hall of Fame in 1994.

Jack Kraft (1961 – 1973) Over 12 seasons, Kraft compiled a 238–95 record (.715). He led Villanova to the NCAA Tournament six times, and five times to the NIT. Only once did Kraft's teams fail to earn a post-season bid, in his final season. The 1971 team, led by Howard Porter, reached the NCAA Championship game, and lost to UCLA at the height of the UCLA dynasty. Kraft was inducted into the Big Five Hall of Fame in 1987. 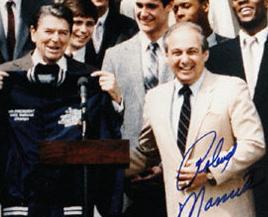 Jay Wright (2001–present) A former Rollie Massimino assistant, Wright led Villanova to a record of 325-183 (.640) over nine seasons and a post-season tournament berth in each of the nine seasons. The Wildcats played in the NIT in 2002, 2003, and 2004, and in the NCAA Tournament in 2005 - 2010. Villanova is 12-6 (.667) in NCAA Tournament play under Wright. It has advanced to four Sweet 16's, two Elite Eights and one Final Four. Four of Wright's five NCAA Tournament losses at Villanova were to the eventual National Champion.