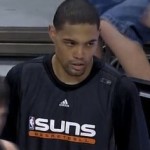 After an injury kept him out of two Summer League games, some of us thought that Scottie Reynolds' NBA chances were dead in the water. Then he came back and performed admirably in the Suns last few games, averaging 10.3 points and 4.7 assists. Although he only put up 7 points and 2 assists against the Warriors summer squad this week, the Suns have already invited him to their training camp.

Reynolds hasn't decided to accept that offer yet, or to go to training camp with one of the other few teams that have invited him to join them. The Suns are looking to have a third point guard on their bench and would like Scottie to compete with Zabian Dowdell (who averaged 10 points and 3.8 assists over five games) for that job.

Regardless of his choice, the result of Scottie's summer league stint is clearly not going to give him much material for his "wall of disrespect." Three games were enough to keep the NBA dream alive for the first team All-American guard.

We don't know which other teams might have offered Scottie a spot at their training camp. It is believed, however, that the Knicks were also interested in signing Scottie after the draft ended.

The Valley of the Suns blog wrote of Scottie:

Reynolds deserves that shot, and while he could still choose to go to training camp somewhere else, I bet he will go with Phoenix considering the conversation I had on Monday with him about how similar the Suns are to Villanova and how well he feels his skills fit this system. I would like to see Reynolds make the roster.

According to the Suns' summer league coach Dan Majerle:

“[Scottie] brought a lot of spark, he pushed the ball, he was competitive and he got to the free throw line. He's got to improve his shot, but a guy like that who can make plays for other people, you surround him with good players and he can be a good asset for anybody’s team.”

How did Scottie prepare to take a shot at the NBA? According to Comcast Sports:

Playing in the League is not the same as college – facing some of the best athletes in the country for an 82-game season takes its toll on the body, and Reynolds knew he had to bulk up. But not exactly in the way he’s accustomed to.

“It wasn’t as much free weights and lifting a lot of weights, it was more body weight, using a lot of different joints that you might not even know you have,” Reynolds said. “I started going to physical therapy, not because anything was wrong with me, but because you get soft tissue massages that opens up so you can run faster, you can recover better, and things like that. It’s a lot of different training I’ve been doing, and it’s actually been working a lot.”

Although he was undrafted, Scottie has a lottery-pick agent: Arn Tellem. Tellem represents some of the top players in both the NBA and Major League Baseball.

Scottie Reynolds is getting his chance, and hopefully someday Scottie will have enough praise to paper every wall in his home.