Share All sharing options for: Scottie's Stats Under Howard's Rules 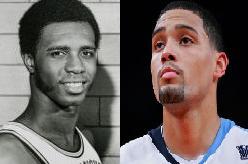 [UPDATED ON JULY 24] As we pick Villanova’s all-time greatest players over the next few weeks, it is important to bear in mind that the NCAA made significant rule changes over the years that make statistical comparisons of players across generations difficult. The introductions of freshman eligibility in 1972, the shot clock in 1985-86, and three-point line a year later have revolutionized the game and dramatically increased scoring. No longer do we see final scores like Tennessee defeating Temple, 11-6, which actually occurred in 1973.

If Scottie Reynolds, Villanova’s #2 all-time leading scorer, had played under the rules and conditions that existed in the days of Howard Porter (#6 all time scorer), what impact would those changes have had on Scotties career scoring total? There is no way to know for sure, but we can take a shot at normalizing Scottie’s stats for a few of the rule changes. By my math, Scotties 2,222 points would drop to 1,242, or over 44%, vs. the 2,026 scored by the late, great Howard Porter. Here’s my math:

Impact of Freshman Ineligibility (-487 points):  The NCAA first permitted freshman to play on varsity teams in the 1972-73 season, so the 487 points Scottie scored in his freshman season would not count.

Impact of 3-Point Shot (-103 points):    The NCAA adopted the three-point line at 19'19" in 1986, further increasing game scores; the line was pushed back to 20'9" in 2008.  So those 223 three-point shots that Scottie made in his sophomore, junior and senior seasons would have counted for only two points each, reducing his total points by 223.  However, offsetting that, one could reasonably assume that Scottie would have taken a step or two closer to the basket on his shots if the bonus point on long-range shots was eliminated.  Thus, Scottie would have benefited from his higher field goal % on two-point shots (47.2%) vs. his 37.2% on the 600 shots he heaved from beyond the arc, resulting in an additional 60 attempts made, or 120 points.

Fewer Games (-278 points):    The number of games played each season has grown over the years.  Scottie played 17 more games during his sophomore, junior and senior years than Howard Porter played in his career.  Scottie averaged 16.4 points per game during those seasons.

Shot Clock (-112 points):  Using statistics I gleaned from the 1984-85 Championship team as a proxy for the pace of the pre-shot clock era, I estimated that Scottie's teams averaged 6.7 more shots per game than teams that played before the shot clock.  Assuming that Scottie and Howard both played 89 varsity games over their careers, Scottie's Villanova teams would have taken 600 more shots than it would have taken without the shot clock.  Scottie took 19.7% of the teams' shots during those years, converting 47.2% of them.  At two points per conversion (remember, no 3-point shot!), Scottie's career scoring totals benefited by 112 points from the shot clock by that logic.

Does all of this mean that Scottie does not deserve to be counted among Villanova’s all-time greats?  Absolutely not.  Rather, it means that Bob Schaefer’s 2,094 career points and Howard Porter’s 2,026  career points are far more impressive than their all-time ranks of #4 and #6, respectively, might otherwise suggest.

I am sure there are lots of things that my analysis did not consider.  Let us know what you think I missed.