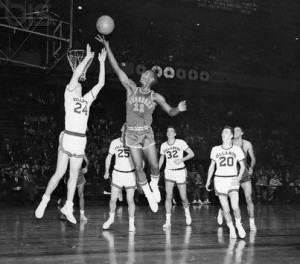 This is the fourth in our series of reader polls to select Villanova's all-time greatest players, this one to select the greatest small forward. The full list of 35 nominees for all positions and the selection criteria used is provided at the end of this post. There is still time to vote in our prior polls by double-clicking on the following links:

SELECT TWO NAMES from the nominees, listed chronologically on the next page, that represent the two best small forwards in Villanova's history. In a subsequent poll the readers will determine Villanova’s all-time starting five from the ten finalists.

Paul Arizin… 6' 4" small forward … played from 1947-1950 … arguably the most storied of all Nova players … holds the Villanova record for most points in a game (85, albeit against Naval Air Material Center) … after being cut for two straight years from his high school team was discovered as a Villanova freshman by Coach Al Severance ... became a high-scoring forward for the Cats, scoring 1,648 points (#14 all-time) in 82 games (20.1 ppg) in only three varsity seasons … is credited with inventing the jump shot, developed out of necessity while playing at St. Monica’s in South Philly to avoid falling on the slippery floor … was named the collegiate player of the year in his senior year (1950) after leading the nation with 25.3 points per game … was drafted by the Philadelphia Warriors of the fledgling NBA in 1950 and went on to a 13-year career with that team … played in 10 NBA All-Star Games, was the 1952 NBA All-Star Game MVP and named to the All-NBA First-Team in 1952, 1956, and 1957 … retired with the then third highest career point total (16,266) in NBA history and was inducted into the Basketball Hall of Fame in 1978 … #11 jersey retired by Villanova in 1994 … inducted into the Big Five Hall of Fame in 2000 ... greatest honor, however, came in 1996 when he was named one of the 50 Greatest Players in NBA history.

Hank Siemiontkowski… 6’5 small forward …played from 1969- 1972 … scored 1,224 points (#39 all-time) over 90 games (13.6 ppg;) and 739 rebounds (#14 all-time) in only three varsity seasons … best remembered for his performance in the 1971 NCAA tournament, scoring a career-high 31 points in an overtime win over Western Kentucky University and 19 points in the Wildcats' loss to the UCLA in the 1971 NCAA final game … was named to the 1971 NCAA East Regional all-tournament team along with Howard Porter … was the 50th selection in the 1972 NBA draft by the Cleveland Cavaliers, playing only one season ... inducted into the Big Five Hall of Fame in 1988.

To come up with the nominees, we considered players whose Villanova jerseys have been retired, were among the all-time Villanova statistical leaders, earned All-America recognition, had success in the NCAA tournament, or were selected in the NBA draft. Active Villanova players are not eligible. The NCAA has made significant rule changes over the years that make statistical comparisons of players across generations difficult. To read more on this topic, see our post “Scottie’s Stats Under Howard’s Rules.” Our nominees are: