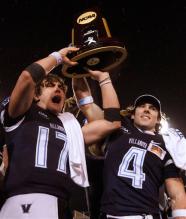 Regardless of your feelings about the future of Villanova’s football program, mid-August is as good a time as any to talk about it’s present. Andy Talley’s squad is returning 17 starters from a team that beat everyone it played last season.* The CAA conference is never a cakewalk, however, and the Wildcats will once again be playing a tough schedule.

After the National Championship celebration was over last season, Villanova football fans began turned their attention to baseball. In particular, the MLB draft prospects of Matt Szczur. In FCS football it is almost unheard of for a player to leave school early, but Szczur wasn’t likely to leave early for the NFL -- it was his baseball talent that saw him picked in the 5th round of the Major League Baseball draft. The Cubs gave Villanova fans something to cheer about, however, when they included a clause in his contract, permitting Szczur to return to school this fall to take classes and finish out his football eligibility.

With perhaps the most talented player in FCS football back in the fold, the Wildcats return the vast majority of an offense that had little difficulty putting points on the board last year.

The most notable loss on offense is Brandyn Harvey, who graduated and signed with the Atlanta Falcons, where he will be playing in the same receiving corps as fellow Villanovan (and the 'Cats’ first-ever Walter Payton Award winner) Brian Finneran. It was Harvey’s sure hands that helped win close games against Temple and Richmond last season.

Other than that, the only other losses on offense were on the offensive line. Sophomore Dan Shirey is expected to move to Center this season which is likely his most natural position. Junior transfer, Jordy Paulemon, is expected to take over at Right Guard after gaining immediate eligibility when Hoftra’s program was disbanded.

The ‘Cats return all of the runningbacks from last year’s championship team, as well as Szczur and Quarterback Chris Whitney. Aaron Ball and Angelo Babbaro should continue their success running the ball in Villanova’s offense. Babbaro was expected to take Szczur’s place in the Wildcat formation if he were unable to return to the team, and we shouldn’t be completely shocked if he gets a few direct-snap plays this season.

Most likely, however, the Wildcat formation will still showcase the unstoppable Matt Szczur. Villanova’s two-sport star is the top returning receiver, and out of the wildcat formation he is a danger both to run the ball or throw it -- having completed all four of his pass attempts last year, including a 13-yard touchdown caught by Chris Whitney on what was apparently backwards-day.

Chris Whitney is more than just Villanova’s best receiving-quarterback. Last season he completed 64.4% of his pass attempts for 1936 yards and an average of 7.8 yards per attempt. With 987 rushing yards, Whitney was also the ‘Cats top runner (though Szczur lead the team with rushing TD’s with 10, to Whitney’s 6).

Sophomore safety Ronnie Akins is expected to take on a bigger role in the secondary this season, however, and defensive line is an area where we may see a true freshman step into a starting role.

Returning is the reigning CAA defensive player of the year, Terrence Thomas. Thomas is a team captain this season and has already made it to the FCS Pre-Season All-American team and the Buck Buchanan Award (for top FCS defensive player) watch list.

Villanova has three players on the pre-season All-America First Team this season, with Szczur and OL Ben Ijalana joining Thomas on the list. Szczur and Ijalana were joined by Chris Whitney on the Walter Payton Award watch-list, and a great season by any of the three (though linemen almost never win) could result in Villanova’s third Payton winning player -- the prior two being Brian Westbrook and Brian Finneran.

Additionally, Ben Ijalana has been placed on the Outland Trophy watchlist, an award for the best  lineman in college football. He was the only FCS player to make the list.

The 2010 Villanova Wildcats football team opens the season with high expectations. Confidence skyrocketed with the return of Matt Szczur, the only Division I player (FBS or FCS) to register a touchdown as a receiver, rusher, passer and kick returner last season. With so many starters returning and some great recruiting classes the last few years, this team has the talent to challenge for the CAA title again this season as well as to make another deep playoff run.

If Villanova football is as good as people think, the season won’t end until January 7th, in Frisco, Texas. We’ll start to find out how good they are, however, on September 3rd in Philadelphia, when your ‘Cats will fight to keep Temple’s name off of the Mayor’s Cup trophy after defeating the cross-town foes last season.

*Forgive me for using a technicality here, but while the one-loss ‘Cats were not undefeated, they did avenge that loss to UNH by handling them easily in the playoffs.