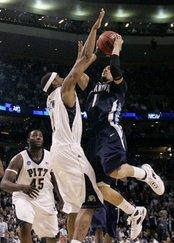 This is the sixth and final poll in our series to select Villanova’s all-time greatest players, this one to select Nova's greatest point guard. The choices have only gotten tougher as we mull over the best guards every to play for "Guard U."

The full list of 36 nominees for all positions and the selection criteria used is provided at the end of this post. There is still time to vote in our prior polls by double-clicking on the following links:

Joe Lord … 5'10" point guard … played from 1941-42 and 1945-47, his career interrupted WWII military service … scored 1,125 points (#47 all time) in 71 games (15.8 ppg; 13thall-time) … scored 45 points against Kings Point on February 4, 1947 -- only Paul Arizin and Bob Schafer are the only Nova players to score more points in a game … was a third team All-American in 1947 … a two-sport athlete, Lord also starred on Villanova’s baseball team … played professionally for the Reading Keys, helping that team win the 1948 championship of the Eastern Professional Basketball League … later played in the National Basketball League, which merged into the NBA in 1949 … was inducted into the Villanova Varsity Club Hall of Fame for baseball in 1978. [Editor’s Note: credit given to Barney Rubble ’87 and Bob ‘52, who provided the research on Joe Lord; Barney found the picture.]

Jimmy Huggard …5'10'' point guard … played from 1958-1961 … scored 1,183 points (#46 all-time) in 75 games (15.8 ppg) …after graduation, played professionally in the old Eastern League, an elite league in the pre-NBA expansion days … part of the basketball class with Tom Samulewicz, Bob Liberatore and Don McGinley, which Jay Wright often calls one of the closest Nova teams he has encountered … after playing career ended, became a top Division I referee in the early days of the Big East… inducted into the Big Five Hall of Fame in 1978.

Wali Jones … 6'2" point guard… played from 1961-64 … scored 1,428 points (#27 all-time) over 85 games (16.8 ppg; #11 all-time) and 233 assists (#30 all-time; 2.7 apg) in only three varsity seasons … crowds would often leave when the Cats were leading in the final minutes, knowing the sure-handed Jones would single-handedly run out the clock … Sports Illustrated wrote in 1964 "with quarterback Wali Jones shouting secret signals to bewilder the opposition, and a magnificent defense of its own, Villanova has become the best basketball team in the East … it is safer to put your head in an electric fan than to drive on Villanova with ball-hawking guards Wali Jones, George Leftwich and Bill Melchionni appearing to have four hands apiece" … voted Villanovan of the Year by the student body over the Senior Class President … drafted by the Baltimore Bullets as the 18thselection overall … named to the NBA All-Rookie Team … traded to the Philadelphia 76ers in the 1965-66 season, where played for the next six years … started a point guard on the 1966-67 Philadelphia team that also featured Wilt Chamberlain, Chet Walker and Billy Cunningham and went 68-13 and dethroned the eight-time defending NBA champion Boston Celtics … later played for the Baltimore Bullets, Detroit Pistons, Milwaukee Bucks (where he played with Kareem Abdul Jabar and Oscar Robertson) and Utah Stars…averaged 9.8 ppg and 3.1 apg in 23.2 mpg … inducted into the Big Five Hall of Fame in 1973. 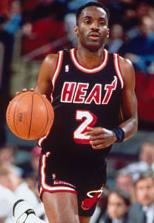 Rory Sparrow … 6’2" point guard… played from 1976-1980 … scored 1,184 points (#45 all-time) and 495 assists (#5 all-time) … made game-winning shots in the last ten seconds of the game on five occasions … selected 75th overall in the 1980 NBA Draft by the New Jersey Nets … later played with the Atlanta Hawks, New York Knicks, Chicago Bulls, Miami Heat, Sacramento Kings and Los Angeles Lakers over a 12-year career … scored the first field goal in Miami Heat history in 1988 … known as one of the steadiest guards in the NBA … started at point guard for the Hawks, Knicks and Heat … averaged 9.0 ppg and 5.0 apg over 27.0 mpg over his 12-year NBA career.… inducted into the Big Five Hall of Fame in 1986 … recognized for his tireless efforts in the community … one of eight charitable athletes honored by Sports Illustrated as co-Sportsman of the Year in 1987. 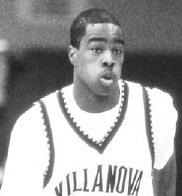 Kyle Lowry … 6’0" point guard… played from 2004-2006 … over two seasons scored 543 points (9.3 ppg), had 171 assists, 108 steals and grabbed 219 rebounds … named to the Big East All-Rookie team and was the Philadelphia Big Five Rookie of the Year … part of the famous four-guard offense on the 2005-2006 team that was ranked #4 and earned a #1 seed in the 2006 NCAA tournament -- their first … helped the Cats reach the Elite Eight before losing to eventual champion Florida … earned Second Team All-Big East honors and declared for the NBA draft after his sophomore season … selected by the Grizzlies with the 24th pick in the 2006 NBA Draft … later traded to the Houston Rockets, where he continues to play. Over four seasons, he has averaged 8.7 ppg, 3.8 apg and 3.0 rpg. 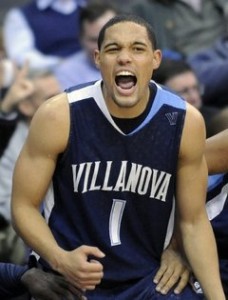 Vote Now
Select up to 2

To come up with the nominees, we considered players whose Villanova jerseys have been retired, were among the all-time Villanova statistical leaders, earned All-America recognition, had success in the NCAA tournament, or were selected in the NBA draft. Active Villanova players are not eligible. The NCAA has made significant rule changes over the years that make statistical comparisons of players across generations difficult. To read more on this topic, see our post "Scottie’s Stats Under Howard’s Rules." Our nominees are: