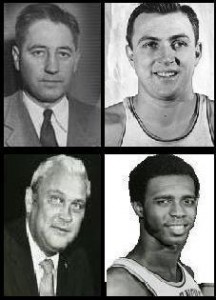 While we all await Barney Rubble ‘87’s first book on the history of Villanova basketball, he's come up with an idea to keep us busy over the waning days of the summer -- a fantasy tournament among teams comprised of the greatest Wildcats to play under each of Villanova’s past five coaches. Using VUHoops reader polling, we will determine the hypothetical winner of a 10-game fantasy tournament, with each team playing the other four teams once. The team with the best overall record will be crowned the tournament winner (head-to-head match-up result will be used in the event of a tie-breaker).

Barney's teams rosters are provided below with their Villanova career statistics (statistics not available are annotated with an "*"). In selecting his five teams, Barney selected the players based solely on their college careers, took some liberties with positions and assigned players who overlapped coaches to the coach they played for in their senior year.

Our first fantasy game matches Team Severance vs. Team Kraft.  I am looking forward to watching Squeaky Sneakers, oldtimer, oldtimer2 and Nervous Nelly go at it.  Let the debate begin!

Note from Barney:  I added George Raveling for height to compensate for this Lilliputian team.  This team might score 110 points per game in its day, with Jim Huggard getting 35 assists per game.

Note from Barney:  The athleticism of this group is amazing!

Note from Barney:  I added Celestine as a ball handler among all these big men, including their 6'5 PG.

Note from Barney:  And why wouldn't Jay Wright have 3 guards starting since that is how he recruited and played this decade?