Villanova and the "Ewing Theory"

Share All sharing options for: Villanova and the "Ewing Theory" 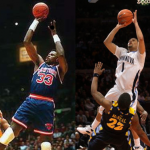 The "Ewing Theory" is an idea first proposed in an article by ESPN's Bill Simmons that suggested that although Patrick Ewing was often the best player on his team (at both Georgetown and with the Knicks), those teams played better when Ewing was not on the court. The theory was later expanded to other teams with a star player -- the '94-'95 UConn Huskies, for example, thrived despite losing their star to the NBA. Similarly, last season we saw a resurgence of Notre Dame basketball while Luke Harangody was sidelined with a bone bruise.

Of course this leads one to wonder how the departure of Villanova's own four-year star player will affect the 'Cats going into the 2010-2011 season. Scottie Reynolds was a force in the backcourt for the past four years. Could a "Ewing Theory" bump be in order?

What is Ewing Theory?

When Bill Simmons explained the Ewing Theory, he laid out two criteria for a situation to qualify:

A star athlete receives an inordinate amount of media attention and fan interest, and yet his teams never win anything substantial with him (other than maybe some early-round playoff series).

That same athlete leaves his team (either by injury, trade, graduation, free agency or retirement) -- and both the media and fans immediately write off the team for the following season.

Under this particular definition, Villanova isn't quite in a Ewing Theory situation. While Scottie Reynolds received an inordinate amount of media attention and certainly held the lions share of our interest as fans, he did take his team to the Final Four as a junior. Then again, Patrick Ewing took his Georgetown team to a National title as a junior, so maybe Scottie's case can get past the first element.

The second element isn't much of an issue, however. Though some media and fans have wondered how Villanova will play in the absence of Scottie, the general expectations for the program next season remain high. Most polls have the 'Cats as one of the higher-rated Big East programs and a top-10 team overall.

A graduate student in theoretical physics recently attempted a more-exact explanation of the theory. On the blog Gravity and Levity, he wrote:

Like the study of traffic patterns, basketball is a network problem.  Each possession can be thought of as a journey from point A to point B, where point A is the beginning of the possession and point B is a shot attempt.  The team can go from A to B by any number of routes.

Every player who touches the ball can either take a shot or pass. When  a team has a star player who is the best offensive option on the court, the tendency is for that player to take more shots.

However, as the blogger explains, while one player may be the most effective scoring option on the team, that does not mean that he should take a shot on every play:

That’s because, as a scorer, he will become less efficient the more he is used.  The more shots Patrick takes, the more the defenses will focus on him and make it hard for him to score.  As a result, Patrick’s teammates should take some significant fraction of the team’s shots, even though they are not as good as he is.

Further evidence shows that, for both guards and big men, field goal percentage decreases as the number of shots per game increases.

When the star is off of the court, the team is forced to share the ball more:

When the team’s best player is not on the court, the team is forced to make harder, lower-percentage plays and to share the ball.  And when a team shares better, it plays better: the defense is kept off balance and has no room to focus in on any one guy. These sorts of improvements can make up for the loss of direct offensive production.

How it applies to Villanova

Villanova loses Scottie Reynolds to graduation at the end of last season. Scottie hit 45% of his shots in 2009-2010 and took about 20% of the team's field goal attempts. Assuming he played every minute of every game, Scottie would have taken roughly "his share" of an equally-distributed pie of shots and no more.

Of course, it isn't as simple as dividing Scottie's 396 field goal attempts by the 1962 shots taken by the team. Scottie played about 15% of the total minutes available to a Wildcat player last season (meaning that he played less than every minute of every game). This would seem to indicate that Scottie's share of the shots-taken was actually slightly higher than an evenly-spread 1/5th when he was on the court.

Scottie took more shots than the players surrounding him, but will his departure lead to a more even-sharing of shooting?

For one thing, the departure of Reynolds may lead to other players taking a bigger role in the offense. One of those players whose role will increase is Corey Fisher. Fisher is no slouch at scoring himself, last season he took the second-greatest number of shots on the team (but still 96 fewer than Scottie), and also had a tendency to take a greater number of shots than his teammates.

With a great amount of talent throughout the roster, however, Fisher may be tempted to pass the ball more. Unlike Scottie Reynolds, whose assist numbers slightly declined over four years, Corey Fisher's assist numbers have only risen as he was given more playing time. Will Fisher pass the ball enough to create a Ewing Theory gain?

Some of the most successful Villanova teams in recent memory had more balanced scoring. In '05-'06 Elite Eight squad, Randy Foye and Allan Ray both scored a truckload of points (677 and 591 respectively), while point-guard Kyle Lowry and Mike Nardi each scored over 300 points as well (and interestingly, Lowry was the most efficient scorer in the starting line-up while taking fewer shots). On the '08-'09 Final Four team, Dante Cunningham and Scottie Reynolds scored a similar number of points (612 and 579 respectively), while Fisher scored 410, Stokes scored 352 and two more players were over 270 points.

In '09-'10, Scottie Reynolds outscored everyone on the team with 602 points. Fisher did alright, scoring 440, while two players were over 300 points and two were over 200. While Scottie scored a lot of points, the second-option (Fisher) was not evenly-matched like it was in those other successful years. On the road to the Final Four, a defense that focused on Dante Cunningham would be taken advantage of by Scottie and vice-versa. It was a similar story in '05-'06, if you paid too much attention to what Randy Foye was doing, Allan Ray was inevitably waiting to knock down a baseline 3.

The basis of the Ewing Theory is that a more-balanced scoring offense will operate better than one that becomes overly reliant on a star player. I have no doubt that the offensive failings late in the 2009-2010 season were fueled by a tendency for teammates to defer to Scottie Reynolds.

He was forced to shoot the ball more, face tougher defenses and still managed to produce great numbers. However, the lack of a strong second option hurt the team in the long run. Though Fisher, Pena, Cheek and others had shown they were capable of scoring, nobody stepped up to become that gemini-scoring threat that could shift the offense into 5th gear.

If Corey Fisher, hot off his 105 point summer league game, comes in and takes Scottie's place, the team is in danger of repeating last season's mistakes.

If, however, Fisher returns as a true point guard and finds ways to share the scoring opportunities with his teammates, expect a Ewing-theory result. While we need to hope that total scoring will not decline over the season, the hope must be that the scoring is divided as evenly as possible through the lineup with multiple "stars" sharing the wealth of points.