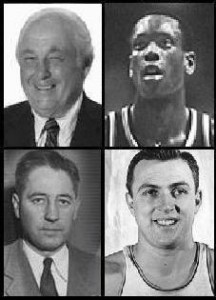 This is the third game of the Barney Rubble '87 Fantasy Tournament. All games will be played in "The Fieldhouse of Dreams." In last night's game, Team Wright used quickness and outside shooting to overcome a huge height disadvantage, winning by one point over Team Lappas in a hotly debated contest. Updated Tournament standings game results follow:

This third game matches Team Massimino, wearing the home whites, vs. Team Severance. Following the rules in effect when the home team played (in the first two-thirds of Daddy Mass' tenure), there will be no shot clock (adopted 1985-86) and no three-point shot (adopted 1986-87). Barney's team rosters are provided below with their Villanova career statistics (unavailable stats are annotated with an "*").

Note from Barney:  I added George Raveling for height to compensate for this Lilliputian team.  This team might score 110 points per game in its day, with Jim Huggard getting 35 assists per game.