What to Expect from The Mayors Cup

Share All sharing options for: What to Expect from The Mayors Cup 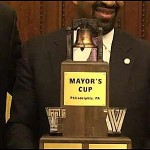 With those considerations, it's not a stretch for Villanovans to imagine this season's Mayor's Cup going about the same as last year's -- a close game, with some dazzling plays by the Wildcats giving them another victory to start the season.

Villanova leads the all-time series against Temple with a record of 16-12-2. When this four-game series ends, Villanova will still have the all-time lead, the only question is how big that lead will be.

Despite all the returning players, neither Temple nor Villanova is the same team that took to the Linc this time last year.

Last year Temple started Vaughn Charlton at Quarterback. This season, the senior Charlton is a tight end and the junior Chester Stewart will be under center at 5pm when this year's rivalry kicks off.

Stewart completed under 50% of his pass attempts last year. He had a few games where he did better, but his overall yardage was 514.

Furthermore, Bernard Pierce, the subject of all of those Heisman-promo billboards only attempted 6 carries last year against the Wildcats. He was very successful in those carries, however, averaging over 7 yards per carry (if you eliminate one massive 22 yard run, he only averaged 4.4yards per carry on his other five). He rose to the top of Temple's depth chart somewhere around week 3, and he will be getting quite a few carries in tomorrow's game.

For Villanova, there will be no Brandyn Harvey, who produced a number of the season's best catches and was Chris Whitney's number one target. This season, the number two target, Matt Szczur, will be expected to step up and lead the charge.

Szczur only had seven touches in last year's Mayor's Cup. This year, he will need to have an impact similar to the one he had against Montana last year. There he had only 4 receptions, but he also carried the ball 14 times and lead the Wildcats in rushing and receiving.

Together with Chris Whitney, he scored a touchdown by passing, receiving and rushing. Szczur also scored on special teams, where he plays every snap. In fact, the only time he won't be on the turf is when the 'Cats are on defense (not that it would stop him if the coaches would allow him, he played safety in high school in addition to QB, running back and serving as a backup Punter).

Matusz will be replaced at nose tackle by Thomas Weaver, another big run-plugger. He may be backed up by a true freshman -- as is always the case in FCS, depth is going to be an issue. While the loss of Osunde will hurt, the 'Cats do return CAA Preseason Defensive Player of the Year, Terence Thomas, as well as two-time All-CAA pick Marquis Kirkland.

Last year's 'Cats played primarily in a 3-3-5 defensive scheme (playing with an extra safety). However, this season, Andy Talley may show some different looks to opposing offenses.

If the defense can stop Temple's rushing attack and Chris Whitney and Matt Szczur can lead the Wildcats to the endzone, expect another thrilling game this year. If the 'Cats allow Bernard Pierce to run at will, the Villanova faithful may want to hide their eyes. If anything is certain, however, it is that Andy Talley is able to make the most of his players.

We will soon learn what the Magician of the Main Line has in store for the 2010 edition of Villanova Football.

Kickoff is at 5:00pm at Lincoln Financial Field and the game will be "televised" on ESPN3.com.

Edit (11:40pm): I have heard that the Villanova student tickets "sold out" for this game.