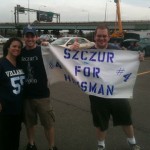 Andy Talley and company pretty much followed the scouting report against Temple. The defense locked in on the run game and forced Chester Stewart to make plays with his arm, and during the first half, they were in control.

Stewart was by no means spectacular early in the game, few of his passes were on target, most either long or short of the receiver, and with Heisman-hopeful Pierce being held under 4 yards per carry, it's not hard to believe that the 'Cats went into half-time with a 14-10 lead.

In the second half the Owls (whose first-down "screech" effect is unlike any sound I have ever heard an Owl generate) realized that the Wildcats' defense wasn't going to let them ground-and-pound. Instead, they dinked-and-dunked their way down the field in the passing game. Finally putting it together in the 4th Quarter.

A number of Villanovans left the field limping. Reports from the training staff have not indicated any longterm damage, but we will surely hear more.

In front of 32,193 fans, the battered Villanova defense grabbed hold of a fumble to get the offense a chance to score from deep within Temple territory. Andy Talley later explained his thoughts by saying that he felt that the field goal attempt from that spot was too long and that he believed that the 'Cats would need to get in the endzone to win.

What resulted was a series that consisted of a run of first down followed by two incomplete pass attempts. Villanova did not earn a first-down in the 4th quarter. After Yako nailed the field goal to end to drive, the Owls were left with 1:40 to work with (a number that would have been lower had a few more run plays taken about half of that time off the clock), and work they did.

The Owls drove back down the field to kick a field goal to re-take the lead and leave about 3 seconds on the clock.

How did the lead go from one point after that field goal to seven points? On the Villanova kickoff return, attempting to make the most of their one play, a number of lateral passes were thrown (one of which was actually an illegal forward pass). Temple grabbed a "fumbled" lateral and ran it into the endzone to score and end the game.

The Owls did not attempt the PAT.

It was a close and very exciting game, and despite the mistakes and perhaps fatigue that lead to the loss, the 'Cats looked like a strong team. If this is the only loss on the record this season, it will hardly be a black mark. If the 'Cats go to Frisco, TX in January, we will won't even remember the 2010 Mayor's Cup.