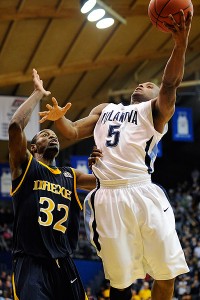 As a Junior, Corey Fisher made a big move into the starting line-up for the Wildcats. He had spent his first two years as Scottie Reynolds' back-up and an extraordinary sixth man. The move paired him with Reynolds in the backcourt, despite both players being listed as point guards.

Of course, most of us saw that move and assumed that it meant one thing: Scottie was being moved to shooting guard. You might, however, describe his actual role as a "combo guard" during his senior season.

Regardless, as a senior now, Corey Fisher is penciled in as Villanova's starting point guard, but wunderkind, Maalik Wayns, is coming on strong after an eye-opening freshman campaign. What role will Wayns play in the backcourt in 2010-2011?

There are really only two options for him: starting games or coming off of the bench. So lets take a look:

With Corey Fisher presumptively running the point this season, Wayns' role as a starter would be playing the 2. Sure, he'd get a few chances to run the point while Fisher takes a breather, but with many of their minutes overlapping, these opportunities may not be plentiful.

Don't get me wrong: Wayns can score -- he has shooting range and he can create his own shots off the dribble. Beyond that, he may be the most talented ball-handler on this team, and will surely be able to drive his way past all but the most defenders.

The downside is that, other than Wayns and Fisher, there is no other guard on this team who is a natural point guard. While their minutes would overlap greatly, Jay Wright would not have the option to ever give them both a breather like he could last year (for Fisher and Scottie) by putting Wayns in the game.

Furthermore, by asking Wayns to be a scoring guard, you risk undermining his development as a true point guard.

At 6'2", Wayns may have issues matching up on defense against shooting guards who are a few inches taller. Defense was an issue for the Wildcats last year, and if the team is to progress in that area this season, it may make sense to move back to using a taller SG.

The other option for starting Wayns is to move Fisher back to the bench. Such a move would seem out of character for Jay Wright, and may create chemistry issues in the locker room that this team doesn't need.

If Wayns is used off the bench this season, he will serve a role similar to the one that Corey Fisher did as a sophomore. In fact, Wayns may serve a greater role as a sixth man, essentially sharing the point with Fisher.

In that role, Wayns would not "start" games, but would receive significant minutes off of the bench. Coach Wright could use the "hot hand" in any situation -- if Wayns is having a better time with the Syracuse zone, he would play more, for example.

In this scenario, Wayns spends the bulk of his time playing his natural position, and has the benefit of a larger line-up surrounding him.

He also may spend less overall time on the court. By not starting, can Wayns really have the "breakout" season that some pundits are predicting?

Maybe starting Wayns would detract attention from Corey Fisher, and hurt his chances of achieving his NBA dreams?

Weigh in: What role do you think Maalik Wayns should play on the 2010-2011 Wildcats?