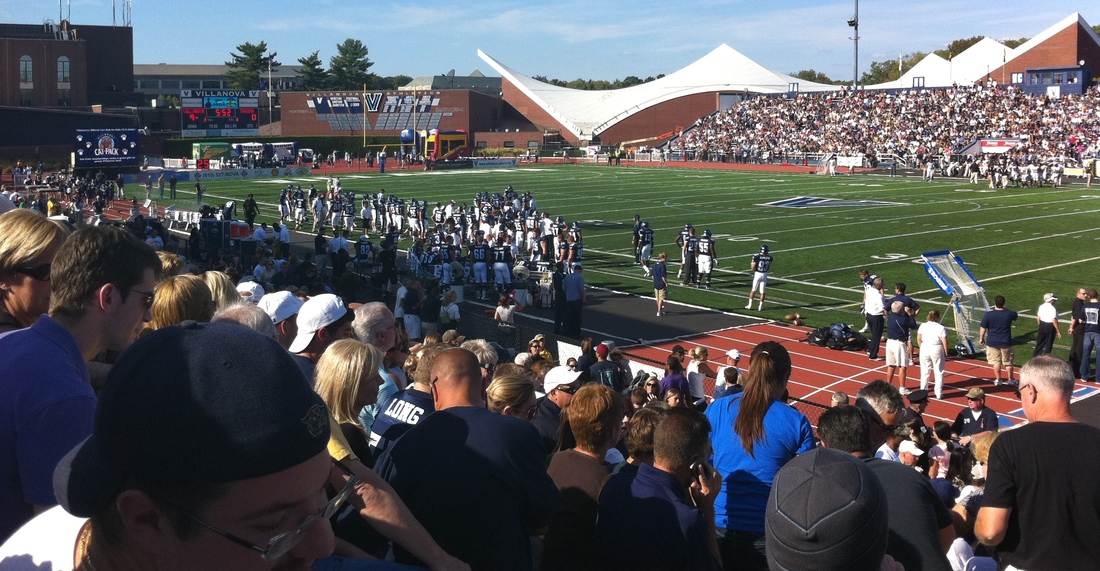 Update September 19: The Cats (2-1) did their part to make Parents' Weekend a happy one, winning 43-7 in their home opener against Towson (1-2) before an announced sellout crowd of 12,111. The Philadelphia Inquirer reports that Villanova’s defense "limited Towson to just two first downs in the first half and eight total [and] a mere 17 rushing yards and 180 total yards. The Tigers' lone score was on a 59-yard pass to Hakeem Moore in the third quarter. Meanwhile, the Wildcats amassed 405 yards (243 rushing, 162 passing). Chris Whitney led the way for the Wildcats completing 9 of 12 passes for 115 yards and two touchdowns. He also ran for 53 yards on 14 carries and scored."

Original Post September 18: The Cats (1-1) defend their FCS #1 ranking this afternoon when they host Towson (1-1) at Villanova stadium at 3:30 PM (TV CN8). Arrive at the stadium early for a special pregame ceremony honoring our 2009 national championship team.

Towson lost its season opener at Indiana, 51-17, but rebounded last Saturday with a thrilling five-overtime, 47-45 victory over Coastal Carolina last Saturday. The Cats, winners of three straight against Towson, defeated Lehigh 35-0 last week, rebounding from a heartbreaking loss to Temple in week one.

According to The Baltimore Sun, the key Towson players to watch are:

Hakeem Moore, senior wide receiver, "who leads the CAA with 185 all-purpose yards per game and had three receptions for 106 yards and two touchdowns last week."

Jordan Dangerfield, sophomore safety, "who leads the Tigers with 19 tackles, including a team-high 10 tackles in the season opener against Indiana."