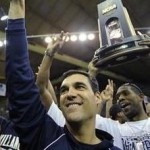 Not too long ago, Eamonn Brennan listed the best and worst case scenarios for each Big East basketball program. In short blurbs he described what he thought the future might hold. About the Wildcats, he notes:

Best case: It's a credit to Jay Wright's yearly recruiting efforts that Villanova can lose a player like Scottie Reynolds and still look like a prospective Big East favorite. That's the case in 2010-11, when guards Corey Fisher and Maalik Wayns and forwards Antonio Pena and Mouphtaou Yarou will look to bring some much-needed balance to Nova's typically guard-heavy offense. If they do, Villanova shouldn't miss a beat. In some ways, they could be even better.

Worst case: That improvement relies on one thing more than any, though: Defense. Villanova was a stellar offensive team last year, but their weak defense -- caused largely by their propensity for sending their opponents to the free throw line (Nova ranked No. 329 in the country in opponents' free throw rate) -- doomed them to their lifeless finish. If Wright's charges can't figure out how to take a few, the Wildcats could be doomed for another good but ultimately disappointing season.

Is Brennan's analysis on point?

The newcomers to this team, JayVaughn Pinkston and James Bell don't seem to figure much into these preseason projections. This seems rather reasonable with Bell recovering from stress fracture surgery and based on what we have been hearing about Pinkston, he may have some work to put in to convert to a new position.

So, essentially Villanova is fielding the same team as it did in 2009-2010 -- except without Scottie Reynolds or Reggie Redding on board. So, isn't the best-case that there isn't much drop off from the previous year?

As you know, the loss of a star player can result in a more efficient offense.

Of course, offense wasn't really the problem in 2009-2010. Where the 'Cats struggled most was on defense -- according to Ken Pomeroy, Villanova had the 12th most efficient offense in Division I last season, but only the 62nd best defense. That was enough to lead to a second-round exit from the NCAA tournament.

from 2007-2008 to 2008-2009 there was a certain amount of roster-stability -- the notable losses between those seasons were Malcolm Grant, Casiem Drummond and Andrew Ott. The key players, however, remained the same. What happened on defense and offense between those years?

The effect of a group of players working out and playing together over a period of time is that they will play more cohesively as a unit. The 2009-2010 Wildcats saw a loss of three starters from that Final Four squad and an influx of freshmen who had to be worked into the rotation. Defense in particular tends to progress and get better over time.

So with the 2010-2011 Wildcats having largely spent the past year getting to know each other as players and working out together, is it reasonable to expect stronger defense? I'd think so.

For the Wildcats, the best case scenario is this:

Corey Fisher becomes a 1st-team All-Big East point guard, distributing the ball to balance the offense and scoring a decent amount as well. The defense gels and a consistent core group of players work to stop opposing scorers without committing the overabundance of fouls seen last year. The 'Cats win the Big East title and make a deep NCAA run.

The worst case scenario is:

The defense never really gets any steam and the players continue to put opposition on the free-throw line at a high rate (essentially GIVING away points). Powerful offense can keep the 'Cats in most games, but Fisher spends too much time trying to score 105 points every game and the team ultimately loses it's balance against tougher opponents. The 'Cats may finish well in the Big East and get a bid to the NCAA tournament, but make another early exit.