Share All sharing options for: Preparing for Penn (Football) 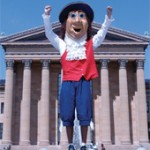 This Saturday, Andy Talley will lead his team into battle in a 105 year-old rivalry against the Penn Quakers. The rivalry has most-often been played at Franklin Field in recent years, drawing just short of 15,000 fans in the last two years. This year's edition at Villanova Stadium won't draw that many because the stadium capacity is smaller than that.*

While Penn opened this rivalry with a bang -- winning the first five meetings -- they have not notched a win against Villanova on the gridiron since 1911 (there have been 10 meetings since the series resumed in the 80s).

Pennsylvania has never won a game at Villanova Stadium, and in the last two games played on the Main Line, the Wildcats have outscored Penn 51-17. Most games, however have been decided by seven points or less. It's no wonder that Penn coach Al Bagnoli thinks that this game "should always be at Franklin Field."

Penn comes into this game on a 9-game winning streak (their last loss coming on September 26th, 2009). Last week they opened their season at home against Lafayette College with a 19-14 win. Defensive back Jonathan Saelinger lead the defense with three interceptions. Both of Lafayette's scoring plays were on defense -- scoring on a blocked punt and an interception -- the Penn defense has not allowed a touchdown in their last nine quarters of play.

This game pits two coaches with over 200 wins against each other. Both teams have appeared in the latest FCS top-25 polls as well, with Villanova sporting the top-spot and the Quakers clocking in at #24 after their first-week win.

The Penn football program had a moment of silence last weekend for Owen Thomas, a former team captain who hanged himself at the end of the spring semester. Scientists at Boston University found indications that Thomas suffered from chronic traumatic encephalopathy, which can cause depression and impulse control. The condition has unusually high rate of incidence in football players and may be related to head trauma incurred in contact sports.

With the memory of their lost-comrade driving them, the Quakers will fight this battle relentlessly. Bagnoli is well aware of how good this Villanova team is, and will surely prepare his boys well for this weekend's showdown. Expect the Wildcats to be given their toughest challenge since week one.

* ...and of course, because Penn students only attend football games when they can throw toast on the field.

Fact on Villanova Sports: Keys to the Game - Villanova-Penn Edition