It wasn't long ago that everyone watching the recruitment of Seattle's Tony Wroten was convinced that he was headed to the University of Kentucky to play for John Calipari. The love affair between Wroten and Calipari has apparently cooled off recently, however, with the player using Twitter to call out the coach for not actively recruiting him lately: 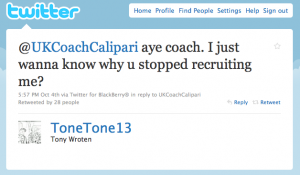 Wroten had been upset that Calipari and UK coaching staff were not present at his games in a tournament this summer. Washington coach Lorenzo Romar, however, had been in attendance at that tournament.

Wroten tweeted recently that his college choice would be announced on October 7th -- tomorrow. His most recent list of five schools (and it is a list that has changed constantly over the last year or more) did not include Kentucky, but did feature three Big East schools in Louisville, Villanova and UConn. He also included local favorites Washington and Seattle University.

It is widely believed that the inclusion of Seattle was both a snub to Calipari, whose Wildcats were dropped from the list, as well as a favor to Cameron Dollar, who had been involved in recruiting Wroten as an assistant to Romar at Washington.

Louisville and Washington are likely Wroten's heavy favorites right now. Villanova is a longshot to land the 2011 guard, and UConn is probably looking at even longer odds. If he lands at any of the three Big East schools on his list, it will have an impact on Villanova -- Wroten in the conference means a stronger Louisville or UConn program.

If he commits to Pitino at Louisville like some expect, will that draw the interest of Quinn Cook? Cook may be intrigued by the chance to match-up against another highly-touted guard from his class in the Big East -- one who's recruitment has garnered far more media attention than his own.

If Wroten surprises the world and picks Villanova, however, the Wildcats will have a superior talent joining the backcourt in 2011-2012, but perhaps only as a one-year rental. How would Wroten react if Jay Wright asked him to come off the bench to spell Maalik Wayns for a year (assuming Wayns is still a Wildcat by then)?

Longterm the Villanova program may be better off with a player like Quinn Cook, or perhaps with another big man instead of either player. Would Villanova fans celebrate a Wroten commitment?

Update (10/7): Wroten just announced his college choice. Despite Jay Wright "making a connection" with his mother, he chose Washington. Based on the obscene amount of fanfare surrounding his decision, I wonder if UDub will need an extra scholarship for his ego.