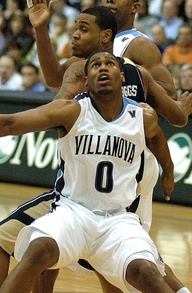 In this year’s Wisdom of Crowds series, our assignment is to figure out how Coach Wright will replace 40% of last season’s offense produced by departed players Scottie Reynolds, Reggie Redding, and Taylor King. In that quest, we now turn to our attention to senior forward, Antonio Pena. By the way, there is still time to vote in our earlier WOC polls:

Use the voting buttons, below, to predict the points per game you think Antonio will score this year and the comment section to explain your thinking. To help you come up with your prediction, we have provided his stats from last season and a "third party expert" player assessment, below.

Villanova.com: Developed into a reliable interior scoring threat for the Wildcats as a junior in 2009-10 and was his team's leading rebounder ... Brings a strong low-post game along with the skill to step away from the basket to make shots ... Named second team All-Philadelphia Big Five in '09-10.

Dime Magazine: Once known only as one of the "other guys" on Sebastian Telfair’s team at storied Lincoln High School … after a journey that has since taken him through two years at a prep school in Connecticut, knee surgery and a redshirt season, Pena has re-emerged as one of the key players on a Villanova.