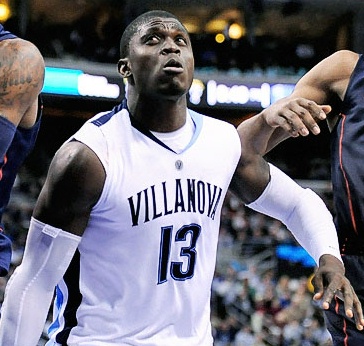 In this year’s Wisdom of Crowds series, our assignment is to figure out how Coach Wright will replace 40% of last season’s offense produced by departed players Scottie Reynolds, Reggie Redding, and Taylor King. In that quest, we now turn to our attention to sophomore forward/center, Mouph Yarou. By the way, there is still time to vote in our earlier WOC polls:

Use the voting buttons, below, to predict the points per game you think Isaiah will score this year and the comment section to explain your thinking. To help you come up with your prediction, we have provided his stats from last season and a "third party expert" player assessment, below.

Draft Express rates Mouph #2 in their "Top Five NBA Prospects in the Big East" (Maalik Wayns is listed #4). The following is a condensed version of their analysis:

Strengths: "… 6-10 with a terrific wingspan and an outstanding frame … looks the part of an NBA center, and moves like one too … good hands, is very fluid relative to his size, and is just now beginning to tap into his immense potential … has a bit of a mid-range jumper in his arsenal, showing good mechanics, a high release point … feel for the game is pretty advanced relative to the stage of development … shows solid passing ability, has nice fundamentals, and can finish with either hand around the basket … extremely intelligent, hard-working ... has the strength and girth to establish position in the paint, and can carve out even more space by backing his man down and then spinning off either shoulder impressively … defensively is a massive presence inside the paint with his chiseled frame and outstanding wingspan … a solid shot-blocking presence … has good instincts and moves his feet well … able to contest shots impressively at times with his length and effort-level."

Development Areas: "Needs to be more aggressive looking for his own shot … often too indecisive with the ball in his hands last year, which rendered him fairly turnover prone … must take advantage of opportunities to assert himself against smaller players … defensively, his lack of experience shows on the perimeter, where he tends to struggle … very foul prone for that reason … room to improve as a defensive rebounder … tends to go after loose balls with one hand at times and doesn't always do a great job of boxing out his opponents."