Rick Pitino later admitted to being the one to vote for St. Johns. Pitino said that he thought that the top of the conference was coming down as the bottom comes up, leading to a lot of teams that are capable of winning the conference title. The Johnnies had not been picked higher than ninth since 2002-2003.

The full poll results were as follows: 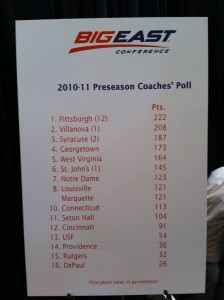 Austin Freeman of Georgetown was named pre-season player of the year and was invited to speak to the amassed crowd of reporters following Commissioner Marinatto's introductory statement, in what was announced to be the beginning of a new Big East Media Day tradition. 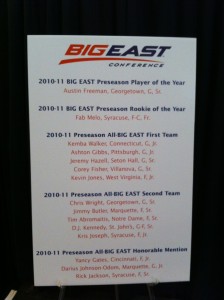 Fisher was a Third-team All-Big East selection last season and was second on the team in scoring last year. This season he will be expected to lead his team.

In other 2010-2011 preseason polls, the Wildcats fared well (all NCAA basketball):

This post was made possible by the Naughty Volvo S60 campaign. You can see more about the campaign at MyBigEastVolvo.com.