Ryan Arcidiacono Keeps It In the Family

Share All sharing options for: Ryan Arcidiacono Keeps It In the Family 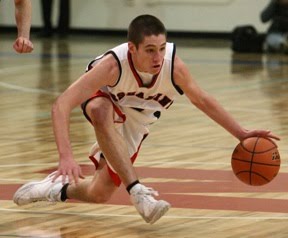 Jon Rothstein is reporting that 2012 Point Guard Ryan Arcidiacono has given Jay Wright his verbal commitment. He visited for Hoops Mania on Friday night, but spent Saturday at Boston College. Rothstein was visiting Villanova's campus today to observe practice and report on the program.

It seems that while Ryan was in Chestnut Hill, MA on Saturday, his heart was still on the Main Line. He told Adam Zagoria, "Yes, I committed to Villanova. I decided on Friday and called [Coach Wright] on Sunday." He cited the proximity of Villanova to his home as well as a love of Villanova, which surely comes from his family's connection to the school as influences on his decision.

At a time when many were worried that the cupboard would be bare, when it came to point guard talent, in 2011 and beyond, Coach Wright has re-stocked the shelves. Arcidiacono is the first member of the class of 2012 to commit to play for Villanova, hopefully leading the way for other talented players to join him in that class.

The 6'3" and 185 lb guard is a skilled and competitive player with deep range on his shot and an ability to create his own shot off the dribble. He is known for his tight handle and good vision on the court and excellent passing ability. Based on the scouting reports, he sounds exactly like the prototypical Villanova guard.

His final two schools were Villanova and Florida.