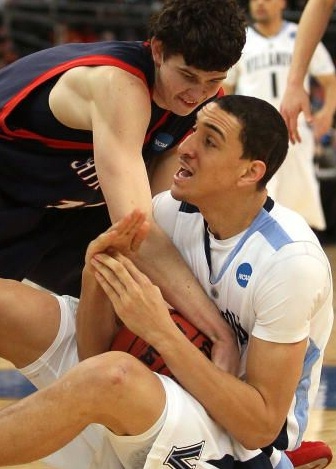 In this year’s Wisdom of Crowds series, our assignment is to figure out how Coach Wright will replace 40% of last season’s offense produced by departed players Scottie Reynolds, Reggie Redding, and Taylor King. In that quest, we now turn to our attention to sophomore F/C, Maurice Sutton. By the way, there is still time to vote in our earlier WOC polls:

Use the voting buttons, below, to predict the points per game you think Mo will score this year and the comment section to explain your thinking. To help you come up with your prediction, we have provided his stats from last season and a "third party expert" player assessment, below.

Villanova.com: "Brings an intriguing skill set ... Possesses athleticism and the ability to run the floor at 6-11 ... Excellent instincts as a shot-blocker ... Can finish around the basket ... Rebounds well ... Needs to add strength. Appeared in 26 games last season with seven starting assignments ... Earned valuable playing time in the NCAA Tournament, contributing a key blocked shot in the final seconds of Villanova's 73-70 overtime victory over Robert Morris to help preserve a lead ... His 25 blocked shots were tops on the Wildcats."

There’s not a lot of highlight film available for Mo over his Nova career, but he is featured at the 1:46 minute mark of this video of the Nova vs. St. Joe’s game.