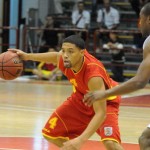 Scottie Reynolds never really got comfortable in Italy and after a poor start to his first professional campaign with Italian club Prima Veroli, the Nova Blog reported that the former First-Team All-American was released. Reynolds chose the Second Division club over an opportunity to warm the bench for Phoenix in the NBA.

Based on poorly-google-translated reports from Italy, Scottie was "unwatchable"

Failed by a number of the association of the Memorial Park street, do not point the finger at individuals, and in particular on unwatchable Scottie Reynolds, in the field for only 22 minutes and totally out of the game . . . Reynolds at the moment is definitely a fish out of water, a foreign element to the team. -- legaduebasket.it

It had to be one of the stars in the league, is proving a major problem for his team, Prima Veroli. Scottie Reynolds had landed in Italy with a prestigious pedigree at the college level, a leader at Villanova University, also a NCAA Final Four, a likely NBA future after the Italian experience, the first ever by a professional out of the United States. Only the boy, 23 years old on Oct. 10, at the moment does not seem mature, even for our Legadue. -- Corriere dello Sport

That source also reported today, however, that:

Reynolds has a heavy contract and for the time being to Veroli it is not spoken about cut. Rather, he might be wanting to leave, request that the club would welcome.

Based on that report, along with one from Basketnet.net, it would appear that Scottie is heading home to the U.S. on his own. According to Basketnet:

Too strong his homesickness and too sudden impact that has not been able to overcome with the European basketball. After Disappointing new evidence against Barcelona, the desire to leave Reynolds has grown, not the least hampered by Veroli, which to date has been penalized, but are not limited to, the performance of his alleged American star. In these hours we are finding the time to exit the contract, it is to suppose that this farewell Veroli points, rightly, not having to pay even a dollar more than those already disbursed to the former superstar of Villanova.

There are very few nice things said about Reynolds in the article announcing his departure, from using scare quotes around "All American," to calling him "one of the biggest hoaxes of all time," and accusing him of quitting on his Italian team, it looks like an ugly reception for the former Villanova star who went to Italy in search of playing time.

Perhaps things would have turned out better for Reynolds had he been playing with some familiar faces in Serie A -- where both Mike Nardi and Allan Ray are notable players. If homesickness was truly the problem for Scottie, it was likely worsened by playing in a smaller city like Veroli, instead of a larger more cosmopolitan town like Milan or Rome.

Despite the harsh words, Scottie was third on the team in scoring with 12.3 points, 2.5 assists and 2.3 steals per game. He seemed to have trouble with the European three-point line, however (a line that Allan Ray has complained about in the past), shooting only 26 percent from beyond the arc.

There is no word on what comes next for Scottie, whether he will try to revive his career abroad or return home to the NBA D-League and work his way on to a bench somewhere.