Share All sharing options for: Szczur Still Considering the NFL 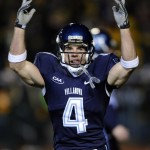 Before getting the news last week that he and left tackle Ben Ijalana were invited to the Senior Bowl, Villanova football star Matt Szczur was prepared to walk away from the sport to play baseball. According to the Philadelphia Inquirer, Szczur had been leaning toward baseball after suffering the left high-ankle sprain that has kept him out of the last four games.

Now with the chance to show his talents to pro scouts in Alabama, ahead of the NFL draft and his deadline to completely commit to the Cubs organization (to the exclusion of football), Szczur's outlook has changed. He told Keith Pompey:

"If I didn't get invited . . . I would be like, 'All right, I'm just going to play baseball,' " said Szczur, who hit in 21 straight games this summer as an outfielder in the Cubs' organization. But the invitation "is more like a second chance."

NFL draft analyst Mike Mayock (whose son is a Villanova football player) believes that Szczur could be picked as high as the 4th round, and that would likely be good enough to keep him on the gridiron:

Obviously, if I get drafted for football, I will pursue that. If you get drafted in the top five rounds, you are going to secure a spot if you outperform your expectations in camp.

The NCAA Championship MVP is expected to return to the Wildcats lineup by the end of the regular season -- either the November 13th home game vs. New Hampshire or the November 20th game at Delaware.

After the weekend's slate of games, the Wildcats are the top-rated team in the Sagarin football ratings, which is a computer-rating that combines FBS and FCS schools. The 'Cats were ranked 55th out of 246 schools, and came in ahead of notables like, Clemson, Notre Dame, Maryland, Navy, Army, Georgia Tech, Ole Miss, and Boston College. Villanova was also rated ahead of five of the eight BIG EAST football schools.

In his conference-ratings, Sagarin has the CAA as his top FCS football conference, listed ahead of both the MAC and Sun Belt conferences of FBS football.