Andy Talley - Coach of the Year

Share All sharing options for: Andy Talley - Coach of the Year 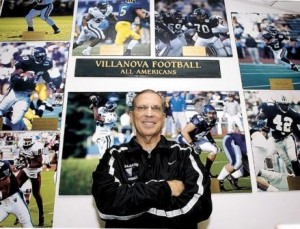 The following is a guest-post by Villanova senior Christopher Provenzano

Speculation and curiosity continues to surround the Football program’s future potential jump from FCS (formerly D-1AA) to the Big East Conference in the FBS (formerly D-1A). As Villanova ‘s Board of Trustees continues its in-depth and thorough evaluation of this move’s feasibility, there is little speculation surrounding why the program is the defending FCS National Champions and in a position to move up to an elite FBS conference. The answer is Head Coach Andy Talley. Talley has overseen the program’s resurrection beginning in 1985 after being dropped four years earlier in 1981. During his coaching tenure on the Mainline, Talley has won almost 200 games and transformed Villanova into one of the elite teams in the Colonial Athletic Association. Talley’s personal coaching journey and rebirth of the Villanova football program reached its pinnacle last December as the Wildcats defeated the Montana Grizzlies 23-21 to win the program’s first national championship.

Talley’s coaching success on the field is equally as impressive as his resume off the field. Talley’s most passionate off field commitment has been working with the National Bone Marrow Foundation since 1993. The NBMF enters potential bone marrow donors into a national bone marrow registry to help increase the odds of a needy patient being able to find a "match" for their bone marrow. Talley’s work with the NBMF has led to over 19,500 people being entered into the bone marrow registry. Additionally, since 2008, Coach Talley has helped team up with 30 other college football programs from all levels around the country to start the "Get in the Game. Save a Life" national bone marrow registration campaign. In the two years since its founding, the group has combined to test over 16,000 potential donors. The Villanova football program’s commitment to this cause was best evidenced in standout Matt Szczur’s willingness to potentially sit out of key playoff games last season including the national championship to complete a bone marrow transplant to a 1-year old girl with leukemia.

To honor Coach Talley’s commitment to Villanova football, it is time to recognize him for his numerous accomplishments both on and off the football field by voting for him for the 2010 Liberty Mutual Coach of the Year Award. Voting is broken down into 3 different stages:

Since fan voting began online on September 14th, Coach Talley has consistently remained in the top 5 in vote totals in either 3rd or 4th place amongst FCS coaches. As the football program continues to evaluate its future, it is time we graciously recognize the numerous achievements of the man who has made this current opportunity possible. Please continue voting Head Coach Andy Talley for the 2010 Liberty Mutual Coach of the Year Award at http://www.coachoftheyear.com/Coaches.aspx#fbid=Dc8nRZvEXEt