Cats Get By Bison

Share All sharing options for: Cats Get By Bison 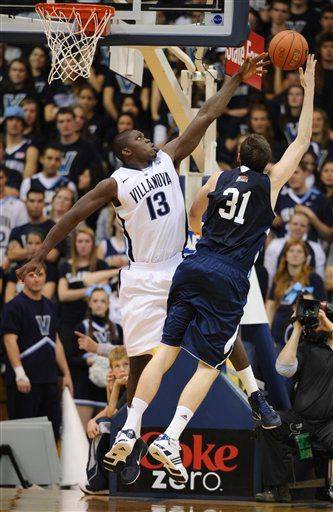 Villanova got a 68-52 win over a pesky Bucknell team last night that Jay Wright would later describe as "a tough team … a contender for the championship of their league …[one that] you’re not going to blow out ..." Jay went on to call the Cat’s opener "a good start for us."

Villanova fans who hoped for an early blowout were surely disappointed by some poor shooting and sloppy play in the early going. Both teams played to a draw until Villanova took the lead for good with 12:38 remaining in the first half. From that point, their lead would grow to as many as 16 points before the Bison clawed their way back to cut it to 5 points halfway through the second half when Maalik Wayns and Corey Fisher took control.

The Cats went most of the way with only seven players, although Maurice Sutton did see seven minutes of action, grabbing four rebounds in that time. 'Nova was without JayVaughn Pinkston as he awaits the outcome of the Administration’s investigation of his altercation last weekend with a Villanova student.

Press accounts of the game, video highlights and the Cat’s box score are provided below. The Closest to the Pin Results are now posted.

Philadelphia Inquirer: Fisher, Villanova too much for Bucknell

"So how did sixth-ranked Villanova look on opening night? Depends on the minute. Ragged for one possession, well-oiled the next. A pass to press row in the first half. Some perfect kickouts leading to smooth jumpers in the second. Nine turnovers before the break. Three afterward. About what you'd expect, in other words."

Like a new pair of store-bought shoes, basketball teams need a bit of breaking in before they're a comfortable fit . The Villanova Wildcats may yet justify their No. 6 preseason ranking in both the Associated Press and ESPN/USA Today coaches' polls, but they'll have to play sharper and more under control than they did in last night's season-opening 68-52 victory over pesky Bucknell at the Pavilion."

"With explosiveness, calm and a both-ends-of-the-floor commitment, Villanova guards Corey Fisher and Maalik Wayns were the difference Friday night as the Wildcats defeated Bucknell, 68-52, in the Pavilion. Fisher shot 8-for-16, made four of eight three-point shots, made no turnovers and scored 24 points. Wayns, a sophomore essentially taking Reynolds’ spot on the floor, added 15 points and six assists."