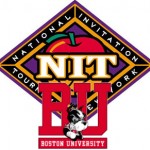 At the end of last season, the Boston University Terriers finished in a tie for third-place in the America East conference and earned the number 4 seed in the conference tournament. They then proceeded to conduct a tournament run that took them all the way to the America East championship game. Former Jay Wright Assistant and current BU head coach Patrick Chambers took that team to the College Basketball Invitational, where they knocked off Oregon State and Morehead State for the Terrier's first postseason victories since 1959.

Coach Chambers returns three starters from last year's team and were picked by America East coaches to win the league this season. Part of the reason for that selection is the return of 6'5" senior swingman John Holland who may be the conference's most talented player. Holland scored 25 for the Terriers in their opener against Northeastern (a 64-66 loss) and another 28 in their first-round N.I.T. Tip-Off win over George Washington.

Holland is joined in the starting line-up by Jake O'Brien, a 6'9" junior forward. O'Brien had seven double-doubles last season while leading the team in rebounding and blocked shots. He was third in scoring after managing to connect on 35% of his 3-point attempts last season.

Coach Chambers added three transfers to his squad, including 6'6" junior swingman Patrick Hazel from Marquette and 6'6" junior Darryl Partin from La Salle. Hazel started the season opener -- scoring only two points in 28 minutes -- and was relegated to providing only 17 minutes off the bench against GWU (recording no points, 2 steals, 1 block and 1 assist). Partin, meanwhile took that starting spot in their second game, scoring 7 points and 5 assists in 33 minutes after providing 27 minutes and 7 points off the bench in their opener.

Coach Chambers is building the Boston University team in Villanova's image. He knows the Wildcats' style of play as well as anyone and there will be no surprises for the Terriers in this game because of it. On the other hand, Jay Wright also knows his former assistant well.

Playing a solid game offensively and defensively should be good enough to win this game. The Terriers recorded more turnovers against GWU than assists (16 turnovers to 12 assists) and were out-rebounded by the Colonials 32-29. The Wildcats will need another good game from their frontcourt to beat the Terriers.

Holland and D.J. Irving are the biggest three-point threats that the Villanova defense will have to lock down. Jake O'Brien may also shoot from beyond the arc, but he scores the majority of his points in twos. Boston University relied on a hot-shooting night to overcome their turnovers and losing rebound-margin.

As always, playing tough defense and taking advantage of BU's mistakes will hopefully allow the 'Cats to punch their ticket to MSG to face UCLA in the N.I.T. Tip-Off semifinals.

Villanova vs. Boston University tips-off Wednesday 11/17 at 8:00PM from the Pavilion and will be carried live online via ESPN3.com.

Don't forget to put your Closest to the Pin picks in before tip-off.

Also, check out Villanova By The Number's recap of the Marist game for some statistical analysis.