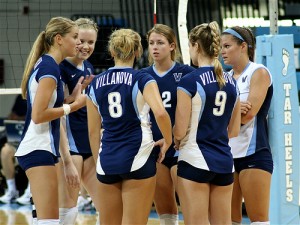 The following is a guest post by @ArizonaSecrets about Villanova's women's volleyball team, who have been having a great season and will be playing in the BIG EAST Volleyball Tournament in Pittsburgh this weekend.

The regular season has come to an end for the Villanova Wildcats Volleyball team. Finishing with a11-3 conference record (23-6 overall), the ‘Cats are hungry for more, earning a BIG EAST Tournament birth for the first time since 2007. Seeded fourth among eight, Villanova looks to extend their season at least beyond this Friday, when they face a fifth seeded Notre Dame (10-4, 17-11) team at 10:00 AM on Pitt University’s campus in Fitzgerald Field House. 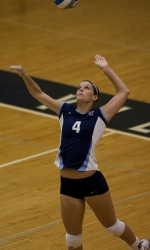 The two teams met last on November 5th in Jake Nevin, when the Fighting Irish challenged Villanova early and often. The imposing perennial powerhouse was persistent but could not overcome the sprightly and vigorous Villanova team, despite stealing the first set from the ‘Cats after trailing by five points late to win 23-25. Villanova Coach Josh Steinbach and his team regrouped and repaid the favor to the Irish, overmastering an early deficit in the second set and forcing overtime to seal a 26-24 win in overtime. Benefitting from tremendous crowd support and impressive play from Libero Kim Maroon and Outside Hitter Morgan Petkovich, the Wildcats continued victoriously in overtime fashion in the third, winning 26-24 again. Villanova finally closed the door on Notre Dame’s efforts in the fourth set, sending the Irish home losers 25-18 to complete the 3-1 victory on home soil.

Leading up to that exciting match, Coach Steinbach acknowledged that Maroon’s crafty play was forcing teams to game plan against the Junior’s abilities and one can surmise that the added attention allows redshirt Sophomore Morgan Petkovich and Junior Outside Hitter Maggie Mergen to impose and enforce up by the net. Petkovich’s achievements in the Notre Dame game and later that weekend against a paltry DePaul team earned her BIG EAST Player of the Week honors. Villanova will need similar efforts from these three key players on Friday morning if they wish to abate Notre Dame’s expected attempts at revenge.

Notre Dame has owned the first 16 matches in the history between these two teams, but since then Villanova has taken 3 of 4 matches from the Irish. Villanova is especially hopeful to take this next matchup, not only for the opportunity to upset nationally ranked and number one seed Cincinnati but also to keep their hopes of reaching the NCAA Tournament alive. Currently ranked with an RPI of 53, Villanova seems poised to earn only the second entrance to the tournament in school history as it stands, however, a win on Friday morning will only solidify the Wildcats’ standing as worthy for a bid.

The BIG EAST will provide a free webcast for all sessions at www.bigeast.org. All tournament matches will also be available on GameTracker at www.pittsburghpanthers.com. You can also send a message of support to the Volleyball team’s twitter account: @Villanovavb.