Nova Loses First of the Season

Share All sharing options for: Nova Loses First of the Season 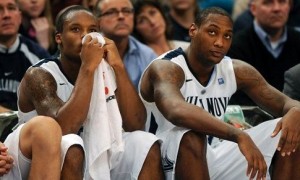 Villanova's guard focused offense was kept in check on Friday's NIT Pre-Season Final against Tennessee. Even with big men Mouphtaou Yarou and Antonio Pena stepping up to score 15 points and 14 points respectively, the Wildcats (5-1) were defeated by the Volunteers 68-78 at Madison Square Garden.

Point Guards Maalik Wayns and Corey Fisher were kept in check by Tennessee's defense. Despite coming off of a career high against UCLA, Fisher finished with 3 points on 1-10 shooting due to the Vols' concentrated defensive effort to keep the senior point guard from driving. Fisher noted, "They played really aggressive. Coach told us they were going to come out and play and that's what they did. They came out and played really aggressive. We missed some shots and they didn't quit during the whole game."

Wayns finished with 11, as did Corey Stokes whose 3-8 shooting from distance kept Nova in striking distance.

NOTE: Villanova fans did get to see James Bell in action. The freshman from Florida, who is recovering from a surgery inserting metal rods in his tibias, saw his first action of his collegiate career logging a minute and getting a shot off.

Villanova now has a week off. They will next host St. Joe's from The Pavilion on Friday December 3rd. [TIX]