Share All sharing options for: Savon Goodman Commits to Villanova! 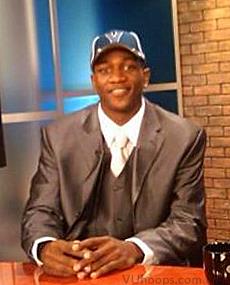 11/30 550p Update: Savon Goodman has made it official, he will attend Villanova University.

As we noted earlier today on Twitter, Savon Goodman, a 6-6 forward prospect from the Class of 2012 is close to announcing his decision to play for Villanova according to the Philadelphia Inquirer. The announcement could come "as early as 5:45 p.m. Tuesday".

Over the weekend, ANC defeated nationally ranked #2 Findlay Prep behind Goodman's impressive play where he recorded 26 points and 14 rebounds (as a quick note, Syracuse-bound Rakeem Christmas only scored 2 points).

Physically, the 6'6" Forward owns a high "Basketball IQ" and has been quoted as having a "grown man's body" and "the best physical specimen" in the Class according to Scout.

Although lacking skills for the outside, Goodman should immediately be able to mix it up down low in the BIG EAST as a freshman. Goodman can get it done at both ends of the court either as a "lock-up" defender or finishing while close to the rim offensively.

Goodman joins Ryan Arcidiacono as members of the Class of 2012 who have committed to Villanova.

Savon, Welcome to the Villanova Family!