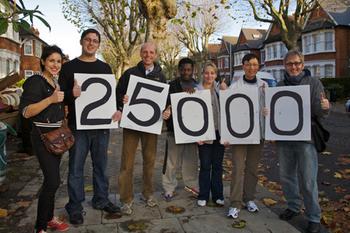 Ed brought to my attention that VUHoops recently passed a very significant milestone.

With the words "I was about to comment on yet another guy less than 6’7,″ but after the shooting I saw last weekend [against Tennessee], we can use a swingman who can make a shot…," in the Savon Goodman Pending Verbal article, ChillCat recorded the 25,000th reader comment in the history of VUhoops.com.

While the casual reader might believe that VUHoops takes on the personality of its editorial staff, it’s actually the thoughtful perspective of our loyal readers that defines us. VUHoops has grown into a large family of ‘Nova basketball fans united by a shared passion for everything that is ‘Nova basketball, AND Villanova University. We’ve exchanged insights and constructive criticisms that have enhanced our experience as Villanova basketball fans. Together, we have celebrated our victories and lamented our defeats. We have done it with class, a positive outlook and the deepest respect for our coaches, players and one another.

Every reader brings something unique to the VUHoops experience.

Some of you add levity to the serious business of ‘Nova basketball. Who did not laugh out loud a couple of months back when Bosshoghazard suggested that any new Villanova football venue include "a BCS busting, in-your-face-Barney-Rubble, Environmentally Friendly, All Pipes go to SJU, Center for bowel relief, porcelain pristineness, no-hands-undefeated flush-center"? Who has not been blown away by the breadth and depth of Barney Rubble's research? Who has not learned about the richness of the Villanova basketball tradition from the unique perspectives shared by our more seasoned readers, including Nervous Nelly and Old Timer (the original and #2)? Who has not been energized by the boundless optimism our student readers. It is little wonder that VUHoops has become the special place we visit each day with such great anticipation.

On behalf of Ed’77, Brian and Kevin, I thank each and every one of our loyal VUHoops readers for their contributions to our collective dialog over the years and look forward to continuing our journey together in pursuit of our next Villanova national championship.

Post Script – The History of VUHoops: On the occasion of this significant milestone, we felt it was appropriate to take a look back at the brief history of VUHoops so you can better appreciate the institution that you helped build. It all began on November 6, 2007 when Mike launched the site with the humble ambition of serving as an aggregator of ‘Nova basketball news. The first reader comment was posted a month later by an anonymous reader from Seattle, with these simple words written on the eve of the Cat’s game against Temple: "No more thrills please, let’s just have a good old fashioned ‘BLOWOUT.’

However, the watershed event for VUHoops came on June 15, 2008 with the post, "Terrell Vinson Inches Closer to ‘Nova." That post inspired three comments, including the first comment by Ed’77. From there things truly took off.

Here are a few of our more memorable milestones, including the posts that generated the most reader comments over the past 30 months:

Cheers to the next 25,000 and a couple of National Championships along the way!