Share All sharing options for: Nova gets "stone cold" win vs. Steve Austin 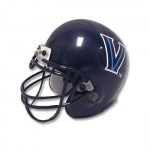 Despite some concerns about the ability of the Villanova passing-defense to stop Stephen F. Austin's high-powered air-attack, but other than a field goal in the second quarter, the Villanova defense did a tremendous job of keeping the Lumberjacks' offense off the scoreboard after the first quarter.

Andy Talley had no issue reaching into his bag of tricks to keep the chains moving, letting holder and baseball-team-shortstop Marlon Calbi toss a touchdown pass to Norman White on a fake field goal to tie to game up with about two minutes left in the first half. Villanova would score two more times on a Chris Whitney touchdown-pass and a Mark Hamilton field goal to end the first half with a 31-24 lead.

The second half would be all-Nova.

Stephen F. Austin never got it going again in the second half, with each drive ending in either a punt or a turnover. The closest they came was a goal-line stand on the Villanova 1-yard line which resulted in a turnover on downs when the Austin coach decided to go for the score on 4th and Goal rather than taking the short field goal attempt.

Lumberjack QB Jeremy Moses threw an interception in each of the final three quarters of play. Those mistakes helped the 'Cats to extend their lead to 54-24 in the second half.

They also had a little help from the fully-recovered Matt Szczur, who had a career-high 11 catches and amassed 196 yards of total offense. They will need him to continue his back-to-form play the rest of the way, after the 'Cats received the bad news that starting wideout Dorian Wells had a ruptured spleen and will be out for the rest of the season.

This senior class has won more football games than any other in the history of the program with their 40th victory this weekend. It was also Andy Talley and the Wildcats' first away-game victory in the playoffs (the 2009 FCS Title Game is considered a "neutral site").

Up next for the Wildcats is a weekend tilt against FCS powerhouse and top-seeded Appalachian State on Saturday, Dec. 11th at NOON in Boone, North Carolina. The game will be televised on ESPN.