The Hawk is Dead & I Killed Him

Share All sharing options for: The Hawk is Dead & I Killed Him

Thanks to good people at Volvo, I was able to spend this past Friday at Villanova. I posted a list of five things I was excited to do before I headed to campus for the Holy War, and I did my best to complete the list.

The weekend started when I picked up the Naughty Volvo S60 from a dealership in Connecticut. The car was the exact opposite from what I remembered of the beat-up old Volvo wagons' driven by some of my friends drove back in high school. It wasn't even a little bit boxy, and it drove like a sports car -- and I had plenty of time to test it out on the trip from Connecticut and back. 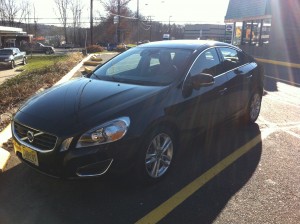 On Friday, we got right up, hopped in the car and headed over to campus. I had a lot of things to do, but first on my list was a trip to the Corner Grill (where they have apparently eliminated my favorite, the Brother Sandwich, from the menu). Some of the younger alums and current students will know why: Tanya would always make lunchtime something special.

As part of the weekend, Volvo gave me a box of stainless steel water bottles to hand out on campus, but I wanted to make sure that Tanya got one. 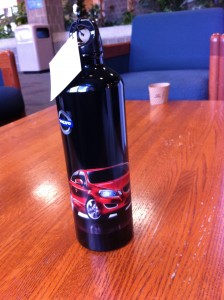 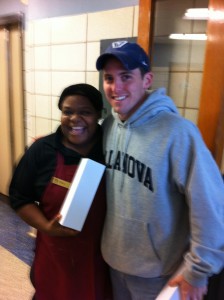 Tanya from the Corner Grill

If you followed my twitter account, you would know that after lunch I took to the campus on a mission to give away the remaining water bottles to the most dedicated Villanova basketball fans I could find.

Thanks to Jon Albert

I ended that campus giveaway tour with a cup of coffee and a chat in the Connolly Center with a couple of students who read the recent Villanovan Feature on myself and VUhoops.com. It was a good chat with a couple of great Villanova fans who seemed pretty excited about the St. Joes game coming up that night.

I always enjoy meeting Villanovans and especially VUhoops readers, so I considered that one of the highlights of the day. 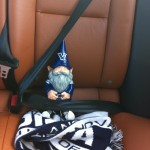 After the giveaway, I headed into Philly to grab a cheesesteak. Sorry to the Pats and Geno's fans, but I was overruled by some friends and so we buckled up the Villagnome and headed out to Tony Luke's. After three years of living in Atlanta, where the locals don't seem to fully grasp the concept of what makes a cheesesteak delicious, it was a delightful experience to eat a true Philly cheesesteak. 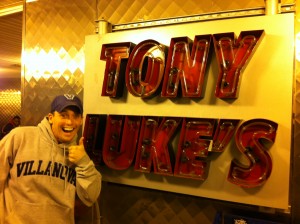 Afterwards, it was time to head over to the Pavilion to get settled in for the game. Volvo provided my seats, in section EB. Almost exactly on center court, but thanks to the weird ceiling in the ski lodge, I could only see the lower portion of the student section, and missed the roll-outs that were apparently passed down (event staff didn't allow them to pass the signs all the way down). 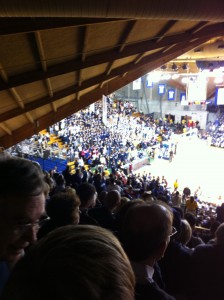 So much for seeing Roll-Outs.

The game went well. I haven't been to many games in the Pavilion stands as an alumnus, and I have rarely sat in the wine-and-cheese section. It was a completely different experience from what I was used to. I was easily the loudest person in the section.

The game itself was good. I never felt like Villanova was truly in trouble. There were a few stretches where it seemed like the Wildcats' offensive possessions were extended by magic. There were lots of second-chances for the 'Cats on Friday and it was clear that regardless of their shooting troubles, Jay Wright's team was going to out-work the Hawks for every rebound.

Dominic Cheek had a great game, scoring 14 points and pulling down 7 rebounds (using only one arm for most of them). Pena also had a strong night, earning his double-double relatively early in the second half.

Despite having 12 rebounds, Mouph Yarou's play concerned me. He hardly looked dominant and often times looked lost or confused on the court when facing defensive pressure. The big man is a contributor, but he still needs to get more comfortable on the court.

I am planning to get more pictures up later, so check back here soon. In the meantime, you can check out the gallery of pictures I posted on our Facebook page.

Thanks again to the Naughty Volvo S60 campaign for setting this all up for me. The S60 was a great car. I had a lot of fun driving it and it had all of the bells and whistles you could imagine a car to have (and perhaps a few that you wouldn't). I would recommend that anyone who is in the market for a new car gives it a test-drive. It is a very good combination of luxury and sporty handling (and it can do speed as well, trust me. I definitely tested that out and it performed admirably).

Please check out MyBigEastVolvo.com and vote for me in their fan poll — the alma mater of the winning blogger will receive a donation from Volvo to it’s scholarship fund.

VUhoops.com believes that all affiliation with Volvo has been noted and is in compliance with The Federal Trade Commission (FTC) Guides Concerning the Use of Endorsements and Testimonials in Advertising that has been in effect since December 1, 2009.