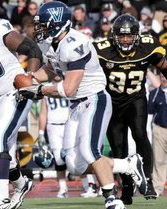 Matt Szczur rushed for three touchdowns, caught one and threw a 54 yard pass to Norman White for a fifth. Only one of Villanova's six touchdowns today didn't result from a play where Matt Szczur touched the ball.

Though expected to be a close game, Appalachian State was the was the top seed in the playoffs and the favorite coming in. Villanova beat them convincingly, 42-24.

The 'Cats scored two touchdowns in every quarter except the third, while holding the Mountaineers to 10 in the first and 14 points in the second half. Ben Ijalana did an excellent job neutralizing the App State star defensive end and the 'Cats committed only one turnover -- a fumble.

Villanova will play again next weekend against Eastern Washington at Roos Field in Cheyney, WA (pronounced Chee-Nee). EWU won in overtime against North Dakota State, 38-31 in a heavy snowstorm. Their stadium has red field turf.

Terry Toohey summed it up for the North Penn Reporter.