A Daunting task in the Inferno

Share All sharing options for: A Daunting task in the Inferno 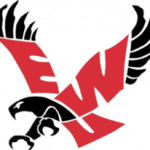 Villanova football has kicked their game into high gear for the playoffs, decisively defeating each of their two highly-rated opponents. The top passing-game in FCS at Stephen F. Austin was neutralized by Andy Talley's defense and the top-seeded Appalachian State team just couldn't keep up with Matt Szczur's electric play. The next challenge is a long-trip to Cheney, Washington to face the Eagles of Eastern Washington University on their red turf -- colloquially called "the inferno."

The 'Cats caught one break already in relation to this trip: EWU's top running back, Taiwan Jones, broke his foot in the quarterfinal game against North Dakota State. The All-American ran for 230-yards in that quarterfinal, as the snow fell down on Roos Field. He ranks second in the FCS in rushing (1,742 yards, 145.2 per game) and all-purpose yardage (201.8).

The Eagles' coaches claim that the loss will not significantly alter their game plan for this weekend. As coach Beau Baldwin explained, "[y]ou’re still going to run the same stuff you normally run. All it means is that we’ll have to be a little more efficient at times and go on some 10- or 12-play drives, instead of the one-play drives you sometimes get with Taiwan."

Freshman Mario Brown will act as Jones' understudy on Friday, taking the bulk of the rushing touches against the 'Cats. Brown has played in all of EWU's games this season, rushing for 214 yards on 61 carries and catching 11 passes for 77 yards. His highlight so far this season was a performance where he ran the ball on six consecutive plays to lead a 61-yard touchdown drive against Southeast Missouri State in the second round of the playoffs.

Eagles quarterback Bo Levi Mitchell (who transferred from SMU) has been playing at a pretty high level. He ranks 36th in FCS for passing efficiency (Chris Whitney is 8th), but he isn't much of a runner -- rarely achieving positive yardage with his feet. EWU was 29th in passing offense this season (Villanova was 71st).

This is hardly the best passing or rushing offense that the 'Cats have faced this season, but they will need to adjust to match the Eagles' game-plan, which may involve some significant passing plays.

Defensively, EWU was the top FCS team for passes picked off with 23. Villanova has 17 picks this season. Despite their tremendous number of interceptions, they ranked only 110th in total pass defense (29th in pass-efficiency defense). Villanova was 79th in that category.

In rushing defense, the Eagles are 41st in FCS, compared to Villanova's 7th-ranked unit.

For total defense EWU was ranked 93rd, while Villanova was 28th this season in the subdivision.

EWU has had a stronger offense all season than the 'Cats, but Villanova also hasn't had the services of Matt Szczur for the entire season. The Wildcats' star player adds a different dimension to the Villanova offense that has allowed them to score a tremendous amount of points this post-season.

Villanova can feel pretty confident attacking Eastern Washington in a similar manner as they approached App State. Though the EWU rushing defense is their strength, defense in general is not a tremendous strength for the Eagles. The passing game can be used to get rack up some big plays -- as long as the 'Cats are making low-risk passes to open receivers (which is Chris Whitney's specialty regardless).

Defensively, this game will be more like SFA than App State, with a lot of downfield passing attempts by the Eagles' offense. They will try to run the ball as well, but without their star running back, they may have difficulty there.

It snowed during the last game at Roos Field and there is a potential for snow in the forecast again on Friday night. Any snow would presumably benefit Villanova, much like it did in last year's playoffs against New Hampshire. Snow tends to negatively affect the passing game (though EWU did win their playoff game with a passing touchdown in overtime), and the team with a better running game should have an advantage.

This game will kick-off at 8:00pm EST from Roos Field in Cheney, WA. It will be televised LIVE on ESPN2.

Update: Susan Lulgjuraj of the Press of Atlantic City wrote a piece on Wildcats' receiver Norman White, who turned down a division 1 basketball scholarship to play football for Villanova. Despite all of the attention given to his teammate, Matt Szczur, White has been a key player this season for the Wildcats.

Update: The New York Times posted an article on Matt Szczur's big decision: To take the Cubs' signing bonus and report to spring training, or give his NFL dreams a chance and put his name in for the NFL draft.