No Repeat for the Cats

Share All sharing options for: No Repeat for the Cats 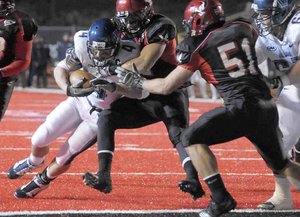 Turnovers were the key to both success and failure for the gridiron Cats in the final weeks of the season. Chris Whitney fumbled away the ball to end potential game winning rallies against Rhode Island and New Hampshire. Villanova’s Martel Moodie forced a fumble to preserve the win in overtime against Delaware that earned the Cats an at-large bid. Turnovers were keys to the Cat’s first two road wins over in the FCS playoffs, where they enjoyed a +6 turnover margin. 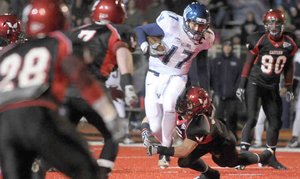 Unfortunately, the fickle finger of fate turned against ‘Nova last night in the Great Pacific Northwest on that hideous blood red stage known as "The Inferno" in frigid temperatures that hovered in the mid-20s. After running the gauntlet with road wins over then #1 Delaware, #2 Steven F. Austin, and #3 Appalachian State, the Cats' hopes for a second national championship ended last night in their loss to #1 Eastern Washington, 31-41 in Cheney, Washington.

Villanova started well, scoring on the opening kickoff when Angelo Babbaro ran 86 yards for a touchdown. After the Eagles scored ten unanswered points, the Cats played catch up the rest of the night. To the delight of 6,000 homers, Eastern Washington took advantage of six Wildcat turnovers. The Cats fumbled four times after losing only 11 fumbles all season and were intercepted twice, leading to 20 points for the Eagles. Eastern Washington held ‘Nova to only 230 yards of offense.

Andy Talley would later say, "I think maybe the travel caught up to us a little bit. We'd already been to Texas and we've been all over. It's finals week for us, and our kids were taking finals [Thursday]. That's not an excuse, but it has been a rough road for us."

While not the way we hoped for the season to end, the Cats showed a lot of heart in these playoffs. Nova fans bid a fond farewell to a great senior class, led by Matt Szczur, Chris Whitney, Angelo Babbaro, Aaron Ball, Chris Farmer, Ben Ijalana, Marquis Kirkland and Martel Moody. Mr. All-Everything, Matt Szczur, had a rough finale (9 rushes for 36 yards and 4 receptions for 25 yards), made even worse when he exited the game in the fourth quarter with a concussion. Matt still has the Senior Bowl on January 29 to look forward to. Chris Whitney put on an inspired performance, playing through pain from leg and back injuries. He was 12/21 passing for 95 yards and rushed for two touchdowns.

To Coach Tally and his staff, Matt Szczur, Chris Whitney and their fellow seniors, and the rest of the 'Nova team, we salute you for another great season.