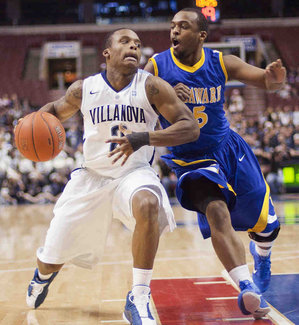 Let’s face it. Even VU Hoops readers, arguably the most ardent ‘Nova basketball fans on the planet, could not get excited about this one. With final exams behind them, most of the Villanova’s students abandoned the Cats, bolting from campus on Thursday with visions of sugar plums dancing in their heads. Against this backdrop, the Cats took on an uninspiring opponent in front of 12,000 lackadaisical fans at the Wells Fargo Center. Jay Wright later thanked the band and cheerleaders for deferring their trips home and making some noise during the game. To make matters worse, temperatures inside the arena were frigid, the after-effect of a Flyers game played that afternoon. ‘Nova players were seen blowing warm breath into their hands at the free throw line.

Clearly, we can all be thankful that in the end, the #10 Cats were able to check the box in the win column, snapping the Blue Hens’ five-game winning streak and improving to 9-1. There also were some notable developments for ‘Nova fans to contemplate as they huddle by the fireplace to escape the cold weather gripping the northeast.

The Cats now must try to avoid slipping into a coma as they contemplate their next trial, visiting the formidable Monmouth Hawks, who sport a 4-7 record and a 283 RPI, on December 22.

Closest to the Pin: the results are now posted. Click here to see the updated leader board.