Wisdom of VUHoops Crowd vs. Vegas

Share All sharing options for: Wisdom of VUHoops Crowd vs. Vegas 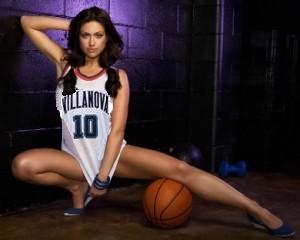 The product of a very modest upbringing, I began working at an early age to save enough to pay for my Villanova education. It would be an understatement of epic proportions to say that my formative years did not teach me the value of a dollar. If you have any doubt, feel free to contact my wife, Stephanie, at barrett113@aol.com!

Blessed with a propensity for statistics and a value-oriented disposition, it should come as no surprise that I never have embraced gambling. Over the course of my 55 years roaming this planet, I've made only a single wager -- $100 on Villanova to beat Georgetown on April 1, 1985. Every atom in my body told me that the Cats would not lose on that day. They didn’t. I fully intend to go to my grave with the satisfaction of being $100 up on Vegas.

In our Closest to the Pin Contest, we routinely report the average score predicted by the VUHoops readers juxtaposed with the Vegas point spread and over-under. While we provide that data for the sole purpose of helping readers formulate their predictions, I have often wondered how the wisdom of the VUHoops crowd compares with that of the Vegas odds makers.

At this time of tremendous stress in anticipation of Nova’s upcoming battle against Monmouth, we decided to give the VUH readers a much-needed respite by exploring how collectively we have fared against the Vegas odds makers in the games played so far this season.

In conducting our analysis, we ignored 'Nova's first four games against Bucknell, Marist, Boston U. and Lafayette, in part because Vegas lines were not posted for two of those games, and in equal part because we were then just getting to know the team. That left us to analyze six games against UCLA, Tennessee, St. Joe's, Penn, La Salle and Delaware.

Our analysis assumes rational bets based solely on a comparison of the average score predicted by the VUHoops readers vs. the point spread and over-under posted by the Vegas odds makers. The results are set out in the table below. 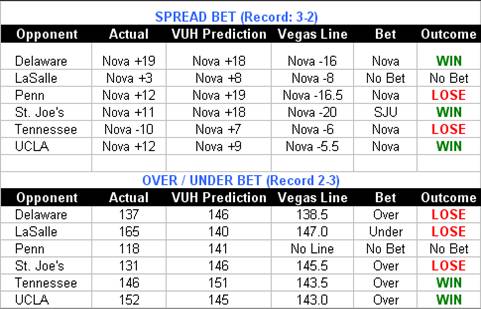 So far, the "intelligence" provided by the collective wisdom of the VUHoops crowd offers no apparent advantage over a simple coin flip. It's a dead heat, with the VUHoops readers ahead 3-2 betting the spread, while the Vegas odds makers are up 3-2 betting the over-under. This ignores "the vig" or service fee withheld by the casinos on winning bets, which really gives Vegas a slight edge overall.

We'll check in again later in the season to see if our luck has gotten better or worse.

With that, your respite officially has ended. You can now return to worrying about the Monmouth game!