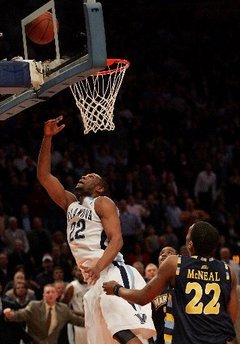 Some analysis after the jump...

The old saying is that it's difficult to beat a team twice in a season, but really hard to beat them three times. Villanova took care of Marquette (barely) in both of their matchups this season. In the first tilt in Milwaukee, it took some SScottie Reynolds deciding he was going streetball ("Did he just dribble between his legs...from behind?"!) to save the Wildcats. One week later at The Pavilion, the Cats raced out to a commanding lead before having to hold on late against the pesky Warriors.

(That's right, they are the Warriors, not the Golden Eagles. I hate when teams change mascots for political reasons.)

Compounding matters more is the fact that Villanova has beaten Marquette 3 times in the last year (4 straight if you go back even farther) by a combined 5 points. These have been some brutal losses for one side, and some sweet ones for the other. They'll be gunning for us.

Do These Three Things - We Probably Win and I Don't Have a Heart-Attack:

Pre-Game drinks are at Stout in New York City. I will NOT be attending this game sadly, but fellow blogger Andrew will be there to give us some perspective on what to expect.