Closest to the Pin Round 18: Connecticut

Share All sharing options for: Closest to the Pin Round 18:  Connecticut

REMINDER: Under the contest rules, winners are determined without regard to whether the contestant correctly picked the winning team (we don’t want to tempt a Nova fan to improve their chances of winning by voting against the Cats) based on the smallest absolute difference between the predicted scores and the actual scores.

VUHoops vs. Vegas: Based on the average predicted scores of the VUHoops Crowd and the posted Vegas line, we would have won $200 by betting Villanova +2.5 and betting the under. The details follow. We’re now +$800 for the season.

Leader Board After 18 Rounds

Update: Monday, January 17 (Game Time). A total of 76 VUHoops readers posted predictions, with 15 picking the Huskies to win. As a group, the readers see ‘Nova winning by a score of 75-73 (a margin of 2.0 points and implied over/under of 145). The Vegas odds makers are picking Connecticut to win by 2.5 points and set the over/under at 146 points, implying a final score of 72-74. KenPom.com’s model also is predicting a Nova loss by one point with a score of 72-73. 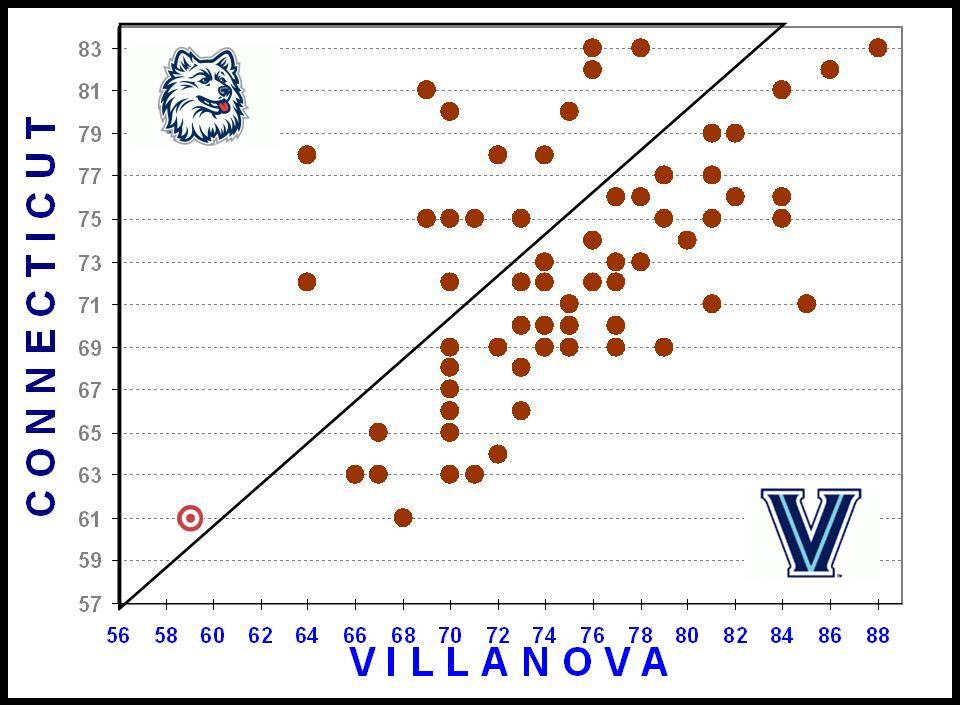 Window Opening: Sunday, January 16 (8:00 AM). The window is now open for readers to post their predicted final scores for ‘Nova’s game at. Connecticut on Monday, January 17 at 3:30 PM (Storrs, ESPN) in our Closest to the Pin Contest. After seventeen rounds, we have a three-way time for first place among Hugh Jass, Joe and Pat ’12, each with 13.5 points. Click here to see our full leader board. In our VUHoops vs. Vegas competition, VUHoops is up $600.

Be sure to check out Brian's game preview.