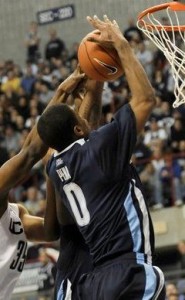 It turned out be the matchup of each team's star players when Villanova traveled to Gampel Pavilion to take on the Connecticut Kembas Huskies.

Coming off a two-day rest and traveling, the #7 Wildcats, led by Corey Fisher's season high 28-points couldn't keep pace as Kemba Walker drained a layup with 2.5 seconds left to ultimately give the #8 Huskies a 61-59 win.

Despite starting the game down 0-10 and missing their first 10 shots, Villanova got on the board four and a half minutes into the game thanks to a Maalik Wayns layup. But the tides turned and the Huskies went ice-cold after that, making just 3 buckets from the field for the balance of the half. Villanova outpaced UConn to have the lead, 22-21 at halftime

In a toughly defensive-minded matchup, both teams shot marginally below average; 35.7% for 'Nova. 34.7% for UConn. But the edge, in the close game came from Connecticut's 2 extra 3-pointers and their +6 rebound margin.

After Walker missed two free-throws while being up two with 34 seconds left. Fisher drained 2 free throws to even the game and putting the ball in the Huskies' possession for Walker's final game winning drive and layup.

Villanova now heads to the Carrier Dome to take on #3 Syracuse on Saturday. Tipoff is slated for 12p.

Note: The Closest to the Pin Results are now posted. Click here to see the game winners and our updated leader board.