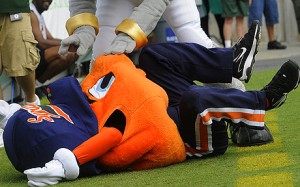 Syracuse fell from the list of unbeaten teams on Monday on their road trip to Pittsburgh, and they will be hungry for a win in front of what may be yet-another record-setting crowd in upstate New York. The Orange have notably beaten Michigan State earlier this season (though, at this point, who hasn't), and have conference wins over Providence, Notre Dame, Seton Hall, St. Johns and Cincinnati.

They are lead in scoring by Canadian junior forward Kris Joseph, who averages 14.6 points and 5.2 rebounds. He is joined by three other players in double-digit scoring: junior point guard Scoop Jardine with 13.6 ppg and 5.9 apg; senior forward Rick Jackson with 13.1 ppg and 11.7 rpg; and sophomore guard Brandon Triche with 10.1 ppg and 3.1 apg. Highly-touted freshman center Fab Melo often starts, but averages only 10.7 minutes per game (against Pitt he played only 2 minutes in the start).

The 6'7" and 207lb Kris Joseph missed the team's trip to Pittsburgh with a head injury incurred when he slammed his head on the court while falling on a drive against Cincy. He hopes to be back in action this weekend, however, and will certainly be a factor on the scoresheet.

Their best 3-pt shooter by average has been reserve Mookie Jones at 41.7%, but Triche and Joseph are the biggest threats who see significant court-time at 34.8% and 34.4% respectively.

The Orange have outrebounded Big East opponents by a rate of 39.2 to 37.2, and have averaged 15.2 assists per Big East contest to 12.5 turnovers. Their opponents have done a slightly-better job of protecting the ball, averaging just 12.2 turnovers per game.

The key to beating Syracuse is to find a solution to their 2-3 zone defense. To truly exploit that defense, the 'Cats will need a great game from both Corey Stokes and either Mouph Yarou or (perhaps and) Antonio Pena.

The point guards need to get the ball inside to the high-post, to run the offense from the middle of the zone. They can accomplish this in two ways: (1) having an off-the-ball player flash into the high post to receive an inlet pass, or (2) driving into the lane.

Once the ball is in the high-post, the zone has to react. If they stay in position, the high post player has a relatively easy shot from free-throw distance for two. More likely, the zone will warp, and one or more defenders will move toward the ball. This opens up a shot either in the low post for Yarou or Pena, or an outside shooter like Stokes. The high post player needs to react quickly to deliver the ball to the open shooter.

If the 'Cats fail to find a way to get the ball into the high post, they will have a hard time scoring points in the half-court set and may be forced to settle for contested, or deep shots. Scoring quickly before the 'Cuse player get set in their zone will also help.

Syracuse does not commit a lot of fouls, but if the 'Cats can force them to do so, it will create a great advantage. Scoring against them will be difficult, so putting the Orange on the line too many times, or turning the ball over through sloppy play could potentially plunge the dagger into the 'Cats in this game.

It is not an insurmountable obstacle to beat Syracuse, but it does require a well-executed game-plan and plenty of leadership on the court. Let's hope that the 'Cats can Juice the Cuse and not get themselves a case of scurvy.